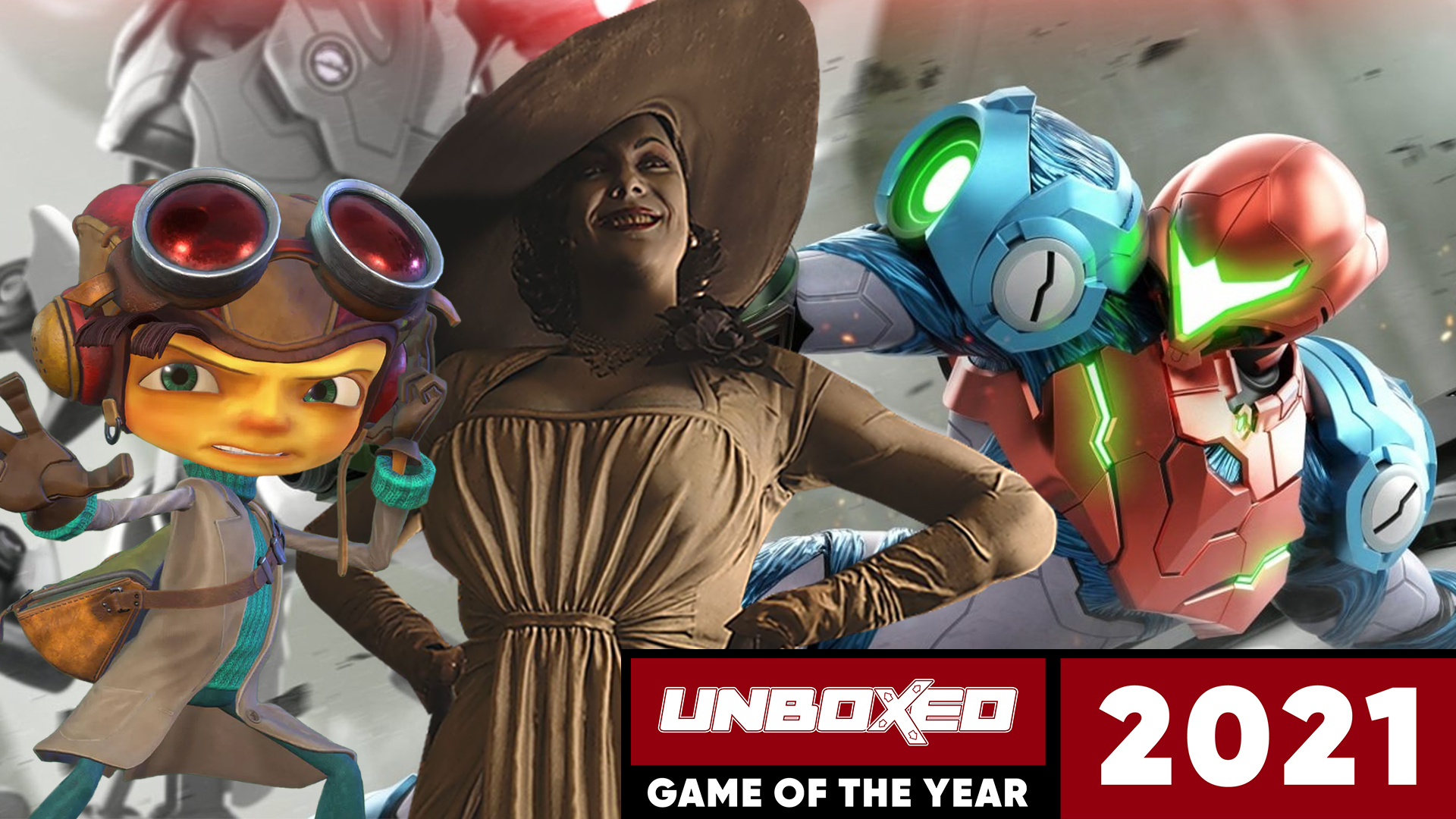 2021 has been a truly bizarre year, it honestly felt like the previous year never actually finished, while we still struggle with lockdowns, supply chains have gotten worse before they get better and with a few exceptions E3 was an absolute snoozefest, even in regards to game releases things have felt off with many high profile delays and what feels like a lot of remasters with some fairing worse than others, but once again it’s time to count down our favourite games from the past year, get your angry comments ready because here are the Unboxed Top 10 Games of 2021

Back in 99, the desire to capture Pokemon on console was greatly desired, unfortunately, the best the N64 could do is let you capture them on film. Regardless of that Pokemon Snap was still an enjoyable yet fairly short safari through several habitats snapping away. Since then, there has been a continuous demand for a sequel, and it only took 21 years to do it.

Much like the first one, not all Pokemon are here but there atleast over 230 to capture in many different settings, each area has different routes to take as well as both Night and Day scenarios. There are also challenges to capture Pokemon doing certain things. New Pokemon Snap is everything we hoped a sequel would be, it’s just a shame it was 5 years too late

While it is a beautiful game, maybe even the best looking Pokemon game ever made, it’s hard to miss how it could have worked so much better on the Wii U. Games like Fatal Frame with its camera and Starfox Zero with its two viewpoints show how much better Snap would have been on the previous system, would it have been the game that saved the Wii U, probably not but let’s just hope it’s not another 20 years before we get another sequel.

The Metal Gear series has always been a bit on the stupid side, it’s never been something I can take seriously and that goes double for its creator. Well it seems like I’m not the only one with this brand new tongue in cheek tribute to the series. Unmetal seems to be if the guys who created Airplane decided to make an action movie parody and it ended up as a game, taking tropes from many movies in the genre and the original Metal Gear games on the MSX.

You play as cliche dripping Jesse Fox, apparently arrested for a crime he didn’t commit and has to sneak his way out of a fortified military base by way of his fists, you will see him recreate his story in realtime and even decide on which path to take. It’s so full of twists and turns that I honestly thought Kojima had penned this parody himself.

The minute I played this game I was immediately hooked, much like the mystical harpoon it’s centred about, adopting a rotoscoped style similar to Another World and original Prince of Persia, Olija centres around a sea captain discovering a harpoon after being ship wrecked, when this harpoon is wedged in somewhere he can grapple himself in that direction, the weapon is used as much for exploration and platforming as it is for combat.

There was just something so satisfying with how the game handled, while you could crash through platforms, there was no fall damage so you could end up squashing enemies beneath you with a satisfying squealch! While it’s not particularly long or hard, its just how well the game flows, those subtle moments of humor and how lifelike the art style is that really pulls it over the line for me

3D World on the Wii U wasn’t a bad game but in regards to being a follow up to Galaxy on the previous system, there is no denying that its way behind other titles especially since it’s successor Odyssey blew it out of the water. But with it being one of the last holdouts still available only on the Wii U, it was about time to see it rereleased on Switch. While the original game is here in all its glory, this spot is actually going to the brand new expansion Bowser’s Fury which plays a lot more like Odyssey than the game it’s piggybacking on.

Armed with Bowser Jr by your side and a Giga catsuit to fight a giant Bowser with, this new expansion may just be one world and several hours long but it felt like a whole new journey. I spent so much time on Bowser’s Fury I almost forgot the original game. While things can get repetitive, especially when Bowser awakens and rains havoc down everywhere there is enough variety with everything you unlock to keep you entertained and plus when you finish, 3D World is still there for you in the end

Annnnnd yet another re-release, seriously the amount of ports and remasters I played this year could make up its own list, this time one of the most controversial game in the Zelda series that wasn’t on a CDi gets one more shot and they honestly hit it out of the park. While many originally praised Skyward Sword’s art style and character development the same can’t be said for its controls.

As the center-piece of the Motion Plus attachment, the combat proved more of a hindrance than an improvement, this time around the sword has been moved to the right thumbstick and it honestly makes all the difference. Gone are the days struggling to get the sword in just the right angle, boss battles that were once a real pain are an absolute breeze and while some people have criticized Nintendo for charging 60$ for this remaster (Sonic Colours GTA Trilogy) at least some actual effort was put into this one

From a Zelda remaster to a knockoff with one of the most hilarious titles ever, honestly thats half the reason it’s up on this list. Turnip Boy really is something with his shit eating grin, his desire to rip up everything and his overall stick it to the man attitude. Turnip Boy, as the name suggests has flat out refused to pay his taxes and is now required by Mayor Onion to complete numerous chores for him, of course things go off the rails and thats even before you fight the mutated deer.

With everything that’s been going in the world when it comes to workers finally rising up and taking a stand, Turnip really speaks to me. On the surface it may just look like a simple Zelda knockoff but deep down there is a truly heartfelt and deep narrative here. Plus it’s great that the IRS are finally off Yoshi’s back after all these years.

I’ve been waiting for this game for what feels like forever especially after that spinoff a few years back hurt so much. Following the original games on Wii this brand new iteration took the concept and ramped it up in every possible way. No more are you just waggling your stick but now everyones favourite otaku assassin Travis Touchdown is armed with a slew of new weapons.

This time around he is fighting aliens from each corner of the galaxy, but the core game is still basically the same, earn money by doing oddjobs to pay for the main fight. There are some issues with grinding to reach the levels but when it works oh man does this game work. Whether it’s the brand new glove moves or Travis and his friends chatting about legendary Japanese director Miike, there was rarely a dull moment to be had, now Suda….let’s talk Killer7 sequel or at least get the original on Switch

Several years ago we awarded the first chapter of Deltarune an Honorary Mention in our end of year list, because we were yet to know what or even if Toby was going to continue with the project we weren’t confident giving it a spot on the list, this time around is much different. Released days after Undertale’s 6th anniversary this brand new chapter expands on the narrative as well as delving deeper into characters like Berdley and Noelle, not to mention new characters like Spamton and the Queen who seems to have a fascination with bananas. While its still early days with the series with at least several more chapters planned, very slowly the world of Deltarune is beginning to unravel, even if the ending left us with more questions than it answered, also if anyone even thinks of hurting Noelle I will end them.

I was incredibly cautious coming into this game, with it being a crowd funded sequel to a long dormant franchise I had been stung before… But I’m happy to say that Psychonauts 2 didn’t just meet my expectations, it damn well shattered them. Set right after the original game which released well over 15 years ago, we are reunited with Raz, Lilli and the rest of our psychic special agents on a whole new adventure, and this is an absolute mental trip. Much like the original, a lot of time and effort was put into both the hub world and each of the levels focusing on several particular mental anguishes, The crew took what worked, like Raz’s range of psychic abilities and fixed what didn’t work like the platforming and exploration. And now that Double Fine is under the ownership of Microsoft and it’s Xbox studios umbrella they’ll never have to beg for money to make a game ever again

Developer Hell is never pretty, we all know about the legendary horror stories like Duke Nukem forever and Too Human spending so much time in the oven that when they were finally pulled out they were a burnt inedible mess. Even a game like The Last Guardian which was actually pretty good still had some jank caused by its almost decade long development. But finally, we have a game that didn’t just survive but absolutely thrived.

19 years after the release of Fusion, MercurySteam took what they learned from the Samus Returns remake to finally make Dread a reality. Whether it was Samus large array of abilities, the absolute nerve-racking escapes from the EMMI’s or the detailed planet or ZDR, every inch of Metroid Dread was fine tuned to absolute perfection. The combat was top notch from the simple critters to the excruciatingly difficult final boss, from start to finish Samus’s latest adventure was well worth the wait and that is why Metroid Dread is officially Unboxed’s 2021 Game of the Year.