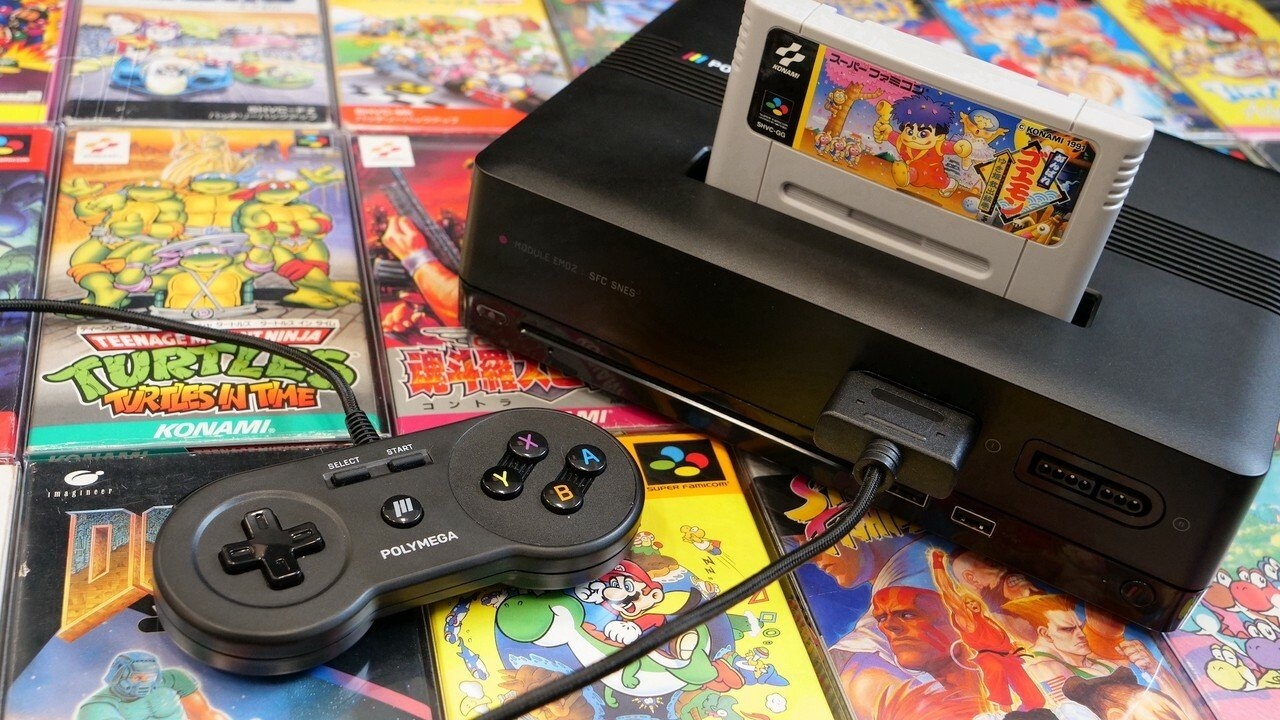 It’s an unfortunate truth but as time moves on, the systems of our youth will sadly leave us, even systems as recent as the sixth generation can just fail on us, one day you’re playing on your PS2 and the next it won’t even turn on. Preservation is a serious issue and while there are plenty of clone consoles for systems like the NES, Genesis and Super Nintendo, it’s a different situation for CD-based systems like the Playstation, Dreamcast and Saturn. Cartridge systems are quite easy to fix and replace, but if the lens in your Saturn starts acting you’re basically shit out of luck. Finding spare parts that are reliable is virtually impossible and even emulation in some cases isn’t an option. This is why we were intrigued when Polymega was announced.

I remember originally hearing about the system back in 2017 when it was going under the name Retroblox, it was announced at a time where retro gaming was at the forefront with devices like the RetroN from Hyperkin. People were also taking out their older systems and embracing RGB with devices like the Framemeister and OSSC (Open Source Scan Converter) utilising the output via SCART cables, people were able to play classic systems in a quality never thought possible outside of Emulation, we also saw new Component cables made for systems before its time from the folks at HD Retrovision.

Retroblox wanted to support a wide variety of both classic cartridge and CD-based systems, this would be done by essentially splitting the device into two parts, you would have the base which would feature the CD unit and other core components and the module section which would have units for every cartridge system. When the system was initially announced there were 4 modules announced; NES, SNES, MegaDrive/32x and TurboGrafx16. Those last two were really interesting as it marked one of the first instances that the 32x or TurboGrafx would be supported on a modern clone system. Even bigger news was that the original Playstation would be supported with the CD unit alongside SegaCD, TurboGrafx CD and even NeoGeo CD

In 2018 they began their official launch, first by announcing that Sega Saturn would be included in the CD unit but also launch preorders with crowdfunding style stretch goals on their website. To put it lightly, the goals they had in place were quite unrealistic, for 5 Million Dollars they would release a Sega Master System Module and offer support for platforms like CD-i, 3DO and even PC-FX (seriously, how many people have even heard of that system!?) and in the ultimate Pipe Dream, raising 8 Million Dollars would see support for Dreamcast and Nintendo 64. While they never did reach their goals, only raising close to 2 Million, I still dropped the $450+ on the base unit.

While we would get a few updates every now and again, like a lot of crowdfunded projects in the past things got quiet….too quiet. Their socials stopped posting with the only activity being the community asking for updates or refunds. Soon enough, forum and Reddit posts started accusing the whole thing of being a scam. Even though the device had been shown off at conventions and such people were starting to draw comparisons to devices like the Coleco Chameleon.

Then things got even worse.

Reports started coming out that the modules were not utilising FPGA and putting performance into question, for anyone not aware Field-programmable gate array had become the standard when making clone consoles as seen in devices like the Analogue Super/Mega NT. They were also planning to have the system available on WalMart, and while they initially accepted preorders, a breakdown in communication saw them pull all orders from the store.

Keep in mind, most of this happened BEFORE Covid. It seems things were never going right for Polymega and its parent company, Playmaji. Their business license got revoked in California (which thankfully got resolved) and if the worldwide chip shortage wasn’t bad enough, the actual system was being manufactured in Myanmar which had fallen into civil unrest following a coup d’état! Oh yeah, let us not forget the huge issue with shipping containers and ports as well. However, in August 2021, it was announced that Polymega would finally be shipping out to preorders and just two months later the system would be in my hands following an almost 3-year wait.

Despite receiving a ding in transit, the system was neatly packaged with the console on top and all the equipment underneath including the systems controller, dongle, HDMI, USB and power cable which unfortunately was the UK plug, fortunately, I had a spare. Booting up was easy to do and the first thing we did was check to see if the disc drive was working, when we first received the system we tweeted a pic @’n Polymega who replied about the dent in the box and mentioned concern about the state of the system itself. That certainly wasn’t what we wanted to have on our mind that night waiting to set it up the next day. Thankfully we put in a copy of Symphony of the Night and while the disc slot requires you really slide it in before it mechanically draws it in, after several seconds it was running, and then we heard the audio….or rather we didn’t hear it properly.

For whatever reason, the start menu audio was playing properly and cutting in and out. Now this could be for a number of reasons, firstly to answer the big question; Yes, the Polymega will play backups of which this was admittedly one of, but we even had issues with legit discs like my copy of Nights into Dreams. The bizarre thing is, the actual games perform swimmingly, it was suggested how the system is connected to your TV like with Splitters, Upscalers and Capture devices may affect how the system performs as well. One of the core features of the Polymega is being able to copy your games to its storage, while only 10GB built in, you can add USB storage, as well as a slot for M.2 SSD Drives. Copying a CD game can take time but it did alleviate the audio issue, we tried out over a dozen CD games from several platforms and the results were inconclusive, it might be something we can figure out down the road.

For what it is worth we went through our entire library of Playstation, Saturn and SegaCD games and it seems the issues we had with games like Symphony of the Night and Nights into Dreams are merely just outliers as pretty much everything else worked with barely any hiccups.

In regards to the controller situation, the included controller takes a lot of design cues from the PS4 controller with thumbsticks taken from the Xbox One. The design and build of the controller are far superior to most other third party controllers and because it uses 2.4Ghz with a dongle I can easily use it on my PC as well. The support for other controllers is actually quite mixed though, despite the system supposedly having Bluetooth built in we were not able to connect any of other system controllers, we did get the PlayStation Classic controller to connect which is the first time it has gotten use in almost two years. The same couldn’t be said for our Sega Saturn USB adaptor from Raphnet, we wanted to connect the 3D Control Pad to play games like Nights and Panzer Dragoon Zwei but the system just wouldn’t recognise it. While the SegaCD and TurboGrafxCD can utilise their respective modules to play with their controllers it isn’t the same for PlayStation and Saturn, not to mention there doesn’t seem to be an easy way to transfer saves from original memory cards.

Despite these niggling issues, Polymega has so much potential. While I don’t own any of the modules so far there has been talk about supporting Nintendo64 and even Dreamcast in the future. While they certainly sound appealing, issues like performance with the N64 and how to properly support the Dreamcast’s VMU will be an issue. While many people will point out that you can very well just use a mixture of a Raspberry Pi and Retroarch and get the same result, and you’re right, I could easily just load up an SD Card with an entire library of ROMs from every system, but honestly what would be the point of that. There’s just something more authentic about picking a cart or disc off the shelf and actually popping it in and no amount of Pi could ever change that.