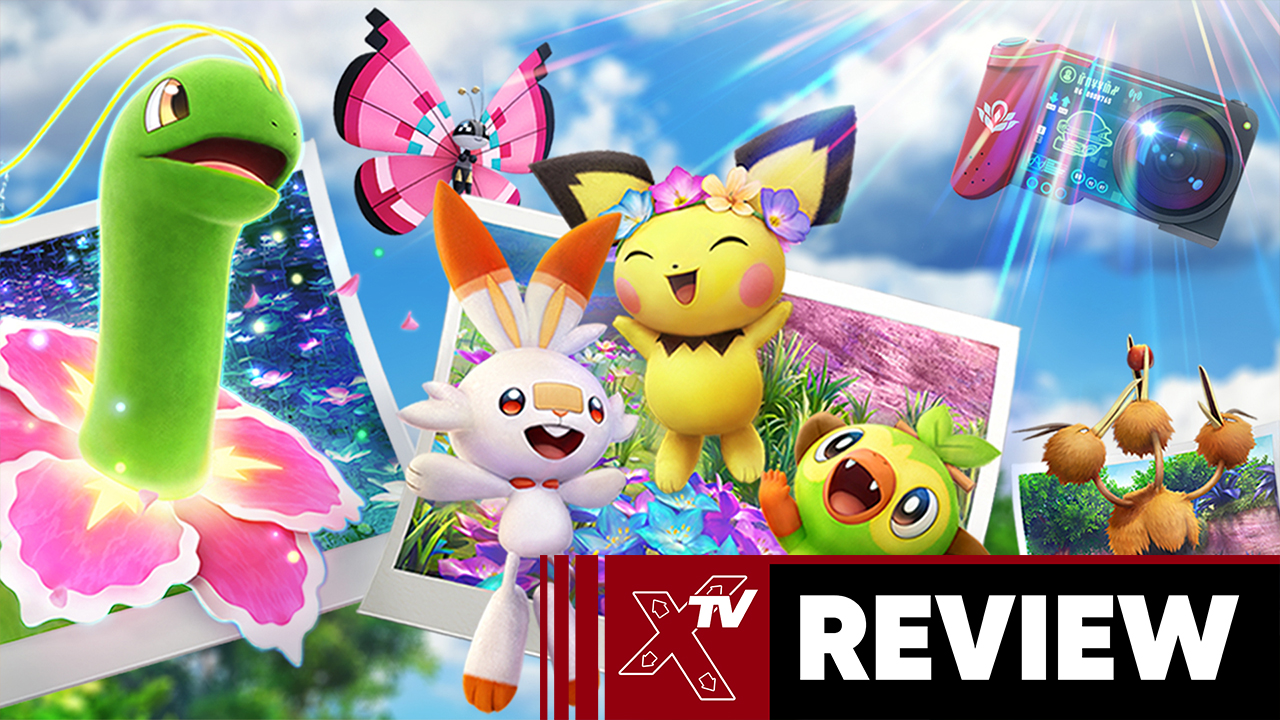 Released back in 99 on the Nintendo 64, Pokemon Snap was one of the first forays in 3D for the series and while it wasn’t the Pokemon game everyone wanted it would eventually become the one they needed with the game being a huge success even being able to print off your snaps at Blockbusters and Lawson’s.

But 22 years later we finally have a sequel and honestly, it’s 4 years too late. Let’s not ignore the elephant in the room, New Pokemon Snap would have been perfect for the previous system which I’ll explain later.

New Snap plays just like old Snap, you are in your own personal buggy watching Pokemon in their natural habitat, your goal is to take the best photo by throwing items to get their attention. The buggy is always moving on a fixed path so you have to be on your toes or you’ll get a Pikachu’s backside.

Even people who haven’t played Pokemon, or have fallen out with the series can get into Snap, there are no stats or nature to memorize all you need to do is sit back and practice your photography skills with all the cute creatures on this safari. Even someone who has admittedly not played a Pokemon game since the second generation was we to enjoy this, even if I barely recognised more than a third of the creatured

While the original on the N64 was certainly a sight to behold it was painfully short with only about 60 Pokemon in all to take photos of on several tracks. While New Snap has roughly the same amount it’s divided up into both Night and Day and even leveling up to different experiences, which means your not going through the exact same path for the seventeenth time.

The original game didn’t have much of a story, you’re a photographer, Professor Oak needs pictures, here’s a buggy, get snapping. This time around aint much different, but this time you select from one of eight character designs with sadly no customisation possible to be the next surveyor on Florio Island for Professor Mirror and his assistant Rita

At its core the gameplay is exactly the same as the original, but it’s all about presentation with this game probably being the best looking Pokemon game ever made, yes Im aware I just said I hadn’t played a Pokemon game since Gold and Silver, but I doubt anyone here will be defending Sword and Shield. The design of each track is absolutely breathtaking, with so many Pokemon to discover.

Photos are judged on pose, size and several other factors and are given a score overall. But this time you are required to collect 4 snaps of each Pokemon of varying star ratings, a one star is just a basic photo while a 4 star is capturing them doing something interesting and unique, however the game can get very liberal over what constitutes a 3 star photo, the subject could be obscured and looking like it’s mid sneezing but you will still receive the grade. Elements from the original like the fruit and music are back too, there also seems to be bonus points for basically bonking them with fruit and photographing their reaction.

Playing through the original again, I found controlling with the thumbstick to be incredibly stiff and slow. It pays to get used to the quick turn C buttons or you are going to miss a lot of things, sadly the controls in New Snap have the same sluggishness about them, even with Motion Controls and adjustable speed it can still feel incredibly slow trying to move.

New Pokemon Snap is one of only a few games that would have worked miles better with the Wii U gamepad, hell it could have benefited way better from Starfox Zero’s setup than even Starfox Zero did, having a third person view on the screen showing the world around the buggy and the camera view on the gamepad, we actually tried using the game in handheld mode which allowed for a full 360 movement but I ended up getting dizzy turning around in my chair.

While night and day and alternate paths offer more variety than the repetitive gameplay in the original. You could find yourself going through the same scenarios several times unsure what to do, especially with this new Instagram like feed full of specific requests to complete and trying to unlock the Illumnia Pokemon path.

New Pokemon Snap may be one of the more relaxing games I’ve played in a while, but it still feels lacking with only about 200 pokemon in all. I understand not all pokemon could fit in one of those paths, I’d hate to see what kind of path Garbodor would be on, but hopefully we could see some more variety in DLC down the road. That aside, it has taken over 20 years to finally see a New Pokemon Snap and it was well worth the wait