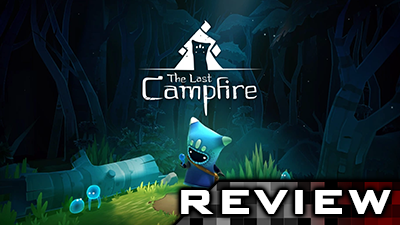 It’s surprising to know that Hello Games is still live and kicking following the whole No Man’s Sky fiasco, me personally I really had no issue with the game when it first came out but then again I never bought into the hype. While it is true that the game has seen major upgrades and revamps since then, I wouldn’t have been surprised to see the initial failure collapse the small studio. But Hello Games have perceived and just released their latest title, a much more simple and heartfelt story in the Last Campfire.

I say story as the game is entirely narrated like it was some sort of bedtime story. You play as Ember who can be charitably described as a tiny walking sock puppet finding themselves washed up in an area that has been described as a place between two others, if you are confused by that statement then you haven’t been playing the same amount of games focused on death as I have lately.

Like, seriously why are soooo many games focusing on death lately.

The narration used in the game help convey conversations as well as offer some mysterious insight to the world around you, where even a simple blocked path feels like a serious part of the story. The main goal is to essentially save Similiar sock puppets like yourself who have become “forlorned” in this mysterious place, these are done by entering little puzzles to receive the flame almost like mini versions of Breath of the World’s shrines.

The puzzles themselves are fairly simple and otherwise harmless which is really what I can say to this game in general, there is no combat whatsoever with the closest thing to death being a hungry pig devouring a giant Venus fly trap plant. The main problem is that the game ends up feeling incredibly respective after a few hours, you arrive at a camp area where you meet a spirit informing me of my fellow travelling sock puppets who are now forlorned, you travel the area, finding the aforementioned sock puppets, finish puzzles that usually amount to “push it-pull it” puzzles and travel to the next area to do it again.

Ok, it might be a bit unfair to label the game as repetitive. Each area does have its own unique style with some interesting characters to meet along the way and a few curve balls, but most of the time if you are not helping forlorns you are taken Item A to Person B or using your new powers that help you move bigger objects like blocks. However there also seem to be serious performance issues as I found the game would freeze for a second of two while loading up new areas, or just wandering around the world. There were also a few times I found myself getting stuck in areas with no ability to move, forcing me to close out of the game

The Last Campfire is a simple yet heartfelt story that really anyone can pick up and play, by biggest gripe with it all is that it is far too short and would have really liked to have spent more time in the world with the game barely clocking in at 8 hours. The game is presented in an almost cartoony art style similar to games like Fe and the cel-shaded Legend of Zelda titles, with collectibles scattered around to find. It really is excellent seeing Hello Games learning some lessons from the debacle No Man’s Sky turned out to be, instead of hyping and promising the moon (18 quintillion moons if we are being honest) we instead get a quiet storytime while gazing at the stars.