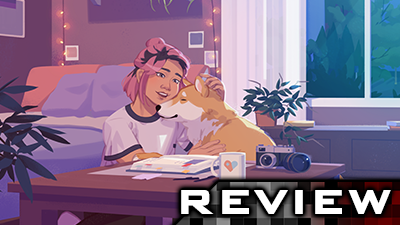 Ok no it’s been one year and three delays if I recall correctly. But you get it. I’ve waited a long time for this game. Now that it’s finally here I saw no better way than to curl up and spend my weekend adopting a virtual doggo and hunting down my next 2D waifu.

Best Friend Forever a doggo dating sim staring you. You’ve recently moved from the big city to Rainbow Bay, the most dog friendly city in the world. Where the human to dog population is almost 1 to 1. Every human has their doggo and every dog their hooman.

You are recently single and have never owned a dog before. Because of a cheesy radio show, you decide to both sign up for Woofr, a dating app exclusive to the city, and adopt a dog.

After answering some amusing questions to set up your dating profile, having a friendly encounter, “settling” into your new home, and passing out in despair on the floor. You wake up the next day to adopt your new best friend and take them to their furever home.

Have fun and good luck.

For the sake of this “Journalist Integrity” I’ve heard of, I must disclose that I’m gay as fuck. Due to this I basically skipped past all of the male options for my chosen lady. And all the female options for said chosen lady. I’m sorry hot-coffee-chick but I’m afraid that unlike Robin you cannot crush my head with your thighs. All of the homo.

I also picked Cardigan as my BFF because his face reminded me of my own good girl Jewel.

After you adopt the doggo of your choosing you’re free to encounter your new husbando/waifu inbetween training your dog. You have two goals in BFF. Train your dog well enough to become Valedictorian in training school, and find your next romantic relationship. You have 16 weeks to do this with some weeks consisting of major events and check-ins on your dog’s training.

Loving and raising Cardigan was the most fun part of the game. Upon adoption he was the sweetest thing. The game notifies you of every lick, bork, poop, and fart. Sometimes he gets spooked and I have to pet him, other times he’s tugging at his leash and I have to pull him back. Or I can just pet him at will and in reality I’m saying “good boy” as I would do my own good girl. The random training events affect his training and mood, but it also makes me feel a little closer to him.

At the end of each week you pick activities for your doggos training. You can choose to train their smarts, manners, trust, fitness, and sociability. Each activity you pick will raise two of these traits or their mood and energy. After training you tend to your loved one with food, grooming, and playtime. Once you and your doggo is exhausted you both snooze and a new week will arrive.

As for the characters you have six lovely individuals to choose from. Each person also has their own doggos, interests, and traits. They’re also voice acted! Not fully, you receive a fully voice acted cut screen in the beginning of the game. But the lines and expressions I did receive were A material. THE RED DEATH WILL DESTROY YOU!!!

Again, I went after Robin because… well read above. As I became closer to her I found that she was actually my ideal woman (until he stabbed me in the back harder than Lisa Lisa). She’s an overworked nurse with a lovely woofer who just so happened to be Valedictorian. Robin provides support and confidence for your training your new BFF, while also complaining about overtime and becoming very excited about her hobby in video games. She’s beyond cute and reading her complain about how understaffed hospitals are was a big mood as a medical worker trying to move up into a just as understaffed field.

My connection between these characters is something I always look for when playing dating sims. I don’t want to play your game if I’m not into your character(s). I would like for every character to be equally interesting and have the ability to find one that stands out from the rest. I did try to be friendly towards other characters, but I couldn’t get close to them because there’s a glaring flaw in the game’s dating mechanic.

It’s far too easy to get close with these characters and earn a date. No, it feels handed to you. I was expecting to win Robin over with the right cues, make her laugh, earn her trust, don’t talk about poop because as medical workers we have to deal with enough shit. However after two encounters I had the option for a first date. Weird but ok. At least I had the option to call it a date or not at the end.

Then, to kill some time I decided to go see Marible to build something in case Robin didn’t work out. Same thing. I talked to her twice and I had a date. WTF? Okay, sorry Marible and Astrid but we are going no contact from here on out.

There’s no satisfying progression in your relationship with the human characters. It got me thinking about how nice it would be to unlock Fox, Jade, or Quincy as secret NG+ routes. But what’s the point if they’re handed to you after you beat the game for the first time. Sure your feelings towards your chosen partner is great, but there’s no challenge to winning their heart.

This lack of challenge is one of many glaring gameplay issues. I, of course, played on Switch. Let’s just say this game is lucky the Switch has touch controls because this port would’ve been unforgivable without them.

The port comes directly from the PC version. I mainly know this because you’re given a useless and slow cursor that you’ll only need during the random training events. Playing in handheld mode is the only way I feel like you can play the game because the cursor is so slow and gets in the way. I struggled to gain control of Cardigan sometimes because that damn cursor blocked me from touching my dog.

There’s also bugs. A lot of basics, easy to fix, stand out like a sore thumb, bugs. When adopting Cardigan I wanted to learn his backstory and got the cards for Cheeseball. When waiting to feed him a treat the flavor text read “Who’s a good girl? Cardigan is!” And the email inbox… This is the most useless item in the game because it doesn’t work!

There’s also some gameplay mechanics that are to be desired. Like only having the option to pick between three characters, two female and one male. You don’t play as your invisible self like in Huniepop, nor are you allowed to make your own character. That’s disappointing because it allows for this thing I’ve long since come to hate in dating sims called “Disconnect”.

The reason why I mostly play western dating sims is because I’m most often presented with a bisexual option. Or I can play with “her/she” pronouns like in HuniePop. I can make my own character and go after the same sex in dream daddy. Hell even The Sims 4 can be turned into a dating sim with the right mods and RPG mindset. Eastern dating sims are limited to the same sex and sexuality. Of course I’m a dirty fujo who will play R18 yaoi games on repeat. But I gave up on Japanese sims because I got sick of the girls calling me a guy. Or the one female option friend-zoning me and yes I am still salty at Mystic Messager for making your friend status permanent with Jaehee’s Valentine event.

Being acknowledged by my name as a female is one thing. Looking down and seeing an avatar that looked nothing like me was another. I also wish the game asked for your sexual preference before starting. There’s an “I’m here, I’m queer!” opinion when composting your profile but it does nothing to repeal the opposite sex. I would like the peace of mind of the male characters only wanting to be friendly. Instead my first encounter with the male characters clearly stated we would romantically get along as well as hot coffee and my crotch. 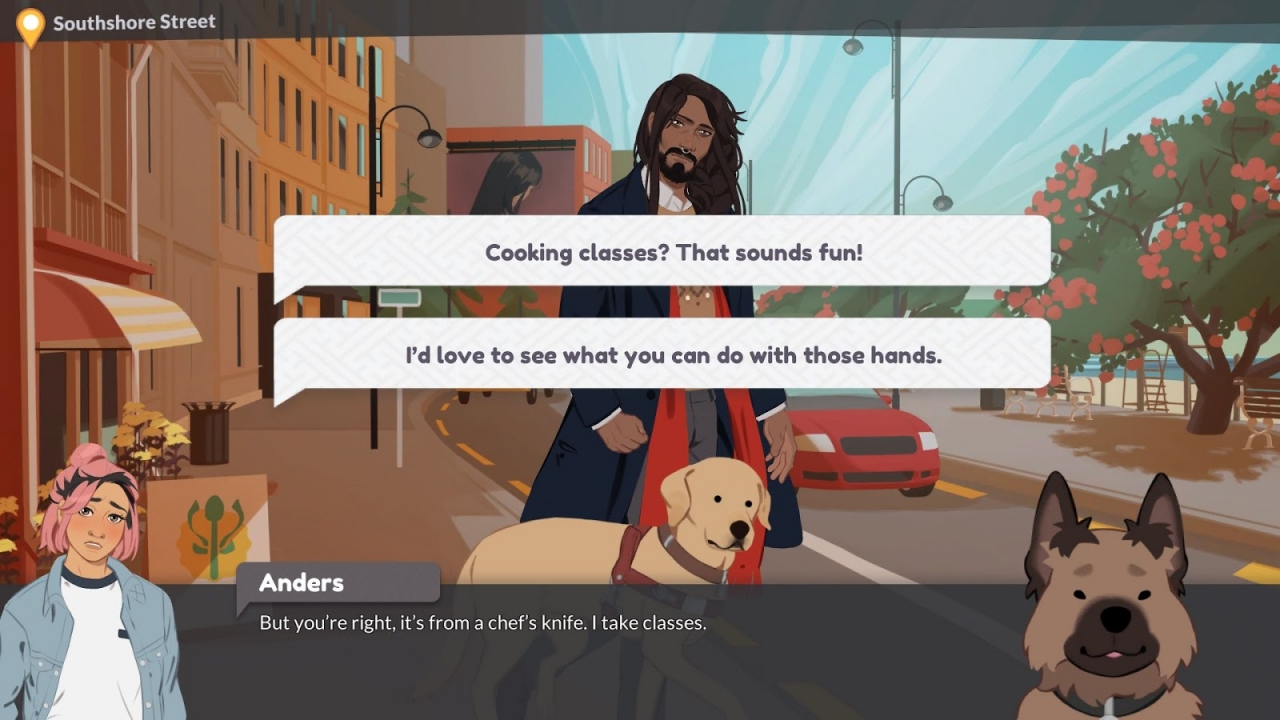 Finally, there’s the lack of a skip button. You have no choice but to expel all of your and your dog’s energy each week. Yes after my encounters and dates with Robin I could train Cardigan. But the training options disappeared leaving me in trudge over to Maribel and risk growing closer to her with succubus-like appeal. And when Cardigan’s needs are already fully met, I cannot move onto the next week without wearing him down.

Why can’t I skip ahead when I don’t want to do anything else for the week and my dog is fine? Why waste time cleaning his spotless ears and depleting his full hunger bar? Games like Person gives you the option to not do anything that day, go home, and skip ahead. The freedom of choice to blow everything and do that is great! In BFF it feels necessary because there’s no point in taking care of my dog and I don’t want to risk seeing the option to date someone I’m not into.

Things like this makes me wonder what the hell the delays were for. Maybe it was for the voice acting because the voice work is solid. But what’s with the bugs? Where did the thought go into immersing the player into the game?

I suspect there most time and thought went into the dogs and art, as they are the best part of the game. The character designs are attractive, the art/backgrounds are appealing, and the doggos are cute as sin and I want them all. The writing isn’t half bad either and I really would like to get to know the rest of these characters. But the gameplay and bugs are distracting and plummets my experience.

I want to love Best Friend Forever more. I want to recommend it to my equally doggo obsessed friends with excitement and not warning. And I will do this when the game is fixed with a simple patch. I also hope the devs will listen to their fans and add more customization options. But for now, 20 bucks is far too great of an asking price. Dear doggo loving reader, wait for a discount and give a good woofer pats while you do.

PROS
Well written and attractive characters
Solid and simple story
Personal and fun doggo gameplay
Grade A voice work from the whole cast
Appealing character designs and artwork
DOGGOS! DOGGOS EVERYWHERE! YOU'RE A GOOD BOY! YOU'RE A GOOD GIRL! YOU'RE ALL THE BEST DOGGOS AND I LOVE YOU ALL!
CONS
A poor Switch port that can only be played in handheld mode
Why am I a literal succubus to these people? I don't want to date you, go away!
Building relationships are so easy it feels lazy
Distracting bugs that breaks gameplay
Lack of immersion and a skip button
5