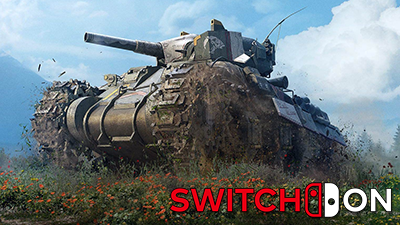 Announced during Nintendo’s surprise Direct Mini today, World of Tanks the worldwide hit Free-to-Play MMO was finally arriving on Nintendo Switch….kind of. Instead of the main version that is available on PC, PS4 and Xbox, the Switch has received World of Tanks Blitz, a scaled back version released for iOS and Android.

Now I am not here to complain about the Switch getting Mobile ports, its completely understandable why as both the Switch and Mobile Phones use the same ARM Architecture, what I AM opposed to is how completely slapdashed this port is.

While the game looks and plays as well as I expect for a Free to Play MMO, it seems like they have just copy-pasted the game directly from mobile. Instead of updating the interface to work properly with a controller we instead have this reticle that is supposed to simulate the touch controls on the mobile version. So instead of easily going through the menus and pushing buttons, you instead have to take your thumbstick and drag this reticle (slowly, might I add) and hover over it. Further proving my point, when you are in the lobby waiting for a match, it suggests using both hands on the screen for better accuracy, like you would on a smartphone.

Now those are just basic issues, they can be easily fixed. But playing through the game for a few hours I was oddly confused just how lifeless my opponents were. It became clear soon enough that I was continuously playing with bots who would rather roll around into walls and basically let me shoot at them like fish in a barrel. I don’t blame them for having bots in their game but with this being World of Tanks long-awaited debut on a Nintendo platform, you’d think they’d give it a bit more attention.

Free to Play games have never been my speciality and World of Tanks especially isn’t a game that I will get much enjoyment in the long term. As big as a success as it has been, there is also the serious issue of the game basically being a Play to Win style game, meaning despite the essence of a F2P game, there will be premium tanks and even premium ammo in the game that will just obliterate anyone else playing. With one tank costing upwards of 650 REAL Dollars.

Playing through the game however, I found myself not having much fun what so ever. Controlling the tanks in game was incredibly complex, finding myself constantly ramming into things and going into the complete opposite direction. Even in early ranks of the game, it is clear the game is wanting you to fork over the cash, numerous times you would clearly hit an opponent dead on only for it to have no effect. While World of Tanks undoubtedly has a large and dedicated fanbase, I will clearly not be one of them.