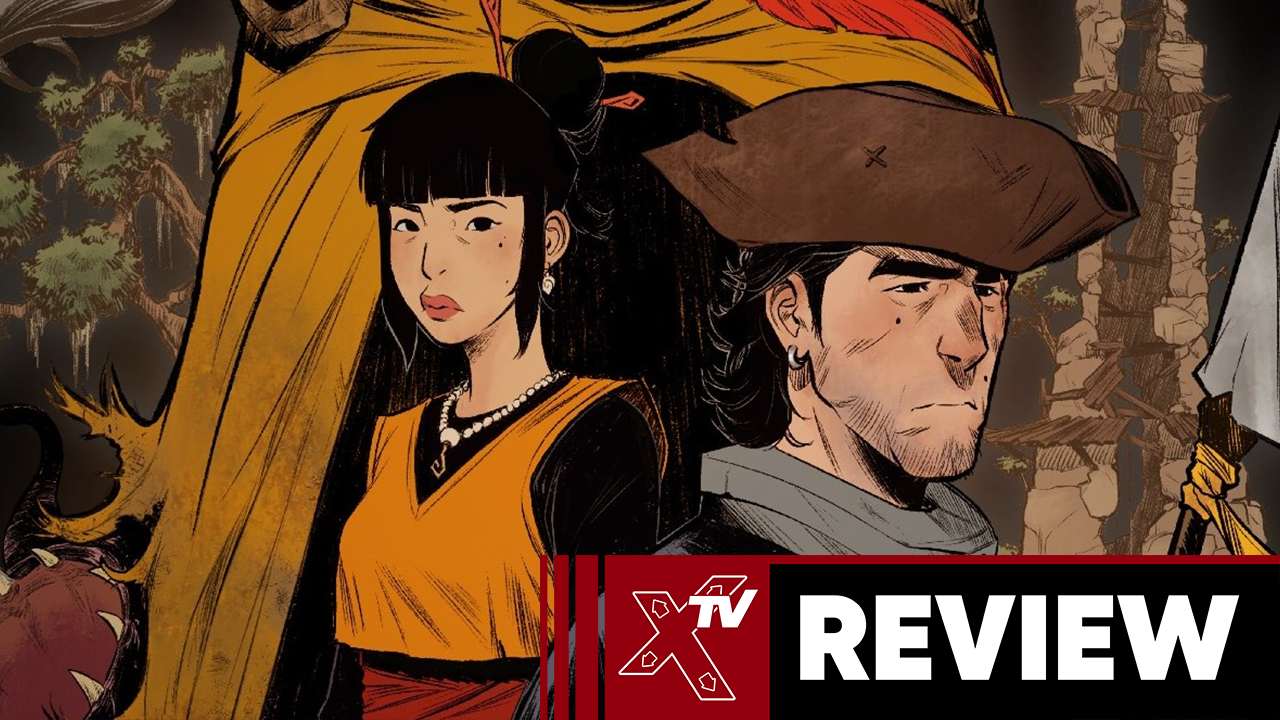 We covered Olijas demo a few months ago in a First Impressions, we were quite impressed with the retro style rotoscoped artwork and the mechanics of a magical harpoon and couldn’t wait to delve in further. Thankfully, the folks over at Devolver were kind enough to give us a review key on Switch.

You play as Faraday, a lord of a small fishing town that has seen brighter days, setting out with his men on a voyage they are caught in a storm and Faraday washes up on a deserted island, after traversing the island full of weird gooey creatures, most of them with teeth you finally come across a magical harpoon you have been seeing in visions.

This harpoon has the magical ability to latch onto creatures and objects and teleporting you to that spot, this allows for a wide variety of platforming and combative strategies. Throughout the entire game there are these niggly little black eyeballs sprouting from the walls and ground, these are the easiest way to get from different platforms.

The rotoscoped artstyle is similiar to titles like Another World and Prince of Persia, although Olija is a lot easier to play through with nowhere near as many cheap deaths. What the chunky pixel look does is create an intimate and somewhat even funny world. There will be plenty of times where platforms will break beneath and you go hurtling down 3 stories, thankfully there is no fall damage, for you at least. You are able to fall and crush an enemy just like a bug and many of them whether they are the mindless slaves, the crazy looking monsters or even the savages with spears and arrows will end up throwing themselves into spike pits or off cliffs to their deaths.

The game has you living on an island full of castaways and during your adventures you see it evolve into a small and thriving little community as you head off in your boat to different islands to unlock keys to get you back home. The islands all have a non linear structure to them with secrets to explore but I’d be hard pressed to call it a Metroidvania or even just a linear one, there is rarely any backtracking and most areas can be accessed right off the bat.

Olija isn’t the name of the harpoon, but rather the princess you seemingly rescue after the first boss battle and then have sporadic interactions with afterwards including a fairly interesting encounter that begins with them sparring harpoons and ends with them fucking underneath a tree….as you do. The cast of characters you met are also varied, the voice work is that Zelda/Rareware style only much more gruff and grumpier, you even find castaways held captive on the islands who you can rescue to upgrade your island.

Combat is a real mixed bag, while you get a crossbow and shotgun later on in the game I found the harpoon and the starting rapier was more than enough. If you are able to get enough consecutive hits with your sword you perform a quick flurry attack. The harpoon works most of the time, but aiming can prove fiddly even when you are pointing directly on the Dpad in the what of combat.

Olija is a fun mystical little game that doesn’t overstay its welcome lasting only 6 or 7 hours at best, boss battles aren’t really that difficult even the final one felt way to simple. Really the only thing that will impede your gameplay is the game locking up, we were playing on the Switch and we found the game having moments of slowdown nearing the end to the point it crashed in the middle of a boss fight and even silently crashed during the final cutscene with the screen staying back and the music fading away.

I played two retro-inspired titles this past week and Olija stood out as the superior one with a way more engaging story and fleshed out combat. I even just found spending time on my home island picking what hat to use and if a game makes hats entertaining, you know you have a winner.