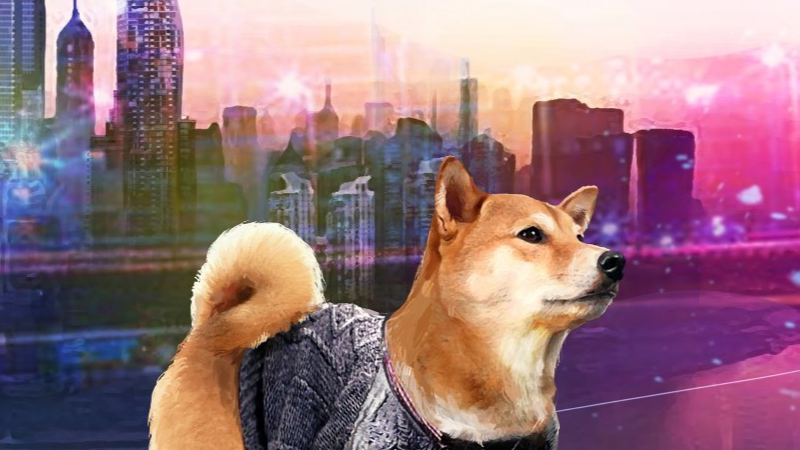 Visit an alternate universe where dogs are top of the food chain. Travel to an island inhabited by one of the cutest, fluffiest breeds known, Shiba Inus. Join Sdy as she faces her past, solve the mystery of the disappearance of her brother, and maybe take down an evil corporation. But… is it worth it?

Dear reader, to say I love dogs is an understatement. I adore dogs. I squeal in delight whenever I see one. Consider it a blessed day just walking or driving by one. Will sincerely greet a dog with a cheerful ‘hello’ or ‘good morning’ instead of the owner. And damn this Covid-bullshit for taking away my ability to pet the good floofers and allow others to pet my own good girl.

Naturally I gravitate towards any game where woofers are in the spotlight. Hell, when the Twitter account ‘Can You Pet The Dog’ started I joked about no longer wanting a game because you couldn’t pet the damn dog. While I wait for Best Friends Forever to drop though, I was linked to this game. Damn if I care what this game is, it has dogs and I want it. Bless the universe and kindness of humans for providing this poor soul the content I crave…

A Summer With The Shiba Inu is a visual novel taking place in a painted alternate universe world where dogs have rightfully taken over and humans are nowhere to be found. Their world paralies much with our own, though with far more advanced technology. But no dog is beneath pulling an all nighter on ‘Beaglenette 3’ and a nice cup of ‘Awoolong tea’. Unless they’re a Patrick Barkman type…

Syd is a Shibu Inu who throws away her life in Canine-da to return home to Shiba Inu Island. As she gets back in touch with her friend Max and remininesses over past local favorites. Syd’s time enjoying her homeland was cut short upon arrival.

The moment she returns home Syd is in immediate danger. Though her appearance has greatly changed and much of the public doesn’t recognize her, that doesn’t prevent attacks from dogs who have a score to settle with her. Then there’s Quei-li, a Labrador who sticks out like a sore paw on the island and seems to know too much about Sdy’s goals and return home.

Her goal: To find her missing brother, Chun-wen who mysteriously disappeared after the last ARIna.

Shibu Inu is a game that I found quite interesting. Yes it already won me over with tasteful puns and a good old fashioned ‘All according to keikaku’ reference. The game quickly dives into the reason why Syd returned home and the attacks against her occur.

For the majority of the game, my focus was trained towards the mysterious ARInas and the Amazon like ARI corporation that dogs blindly put faith in. Though the goal of the game is to make the right choices to find Chun-wen and unlock a good or true ending. However, ARInas and Syd’s history within them does feel to overshadow Sdy’s quest. Though the two plots intertwine and you cannot locate Chun-wen without facing the ARInas, there were times where I thought “oh right we’re supposed to find the brother”. Completely forgetting Chun-wen in favor of creating peace with Syd’s past within the virtual battle royales and the perks they provide.

I wondered just exactly were the ARInas? Are they truly the source of lies and broken dreams or great wealth and promise. How did the ARI manage to convince the Shiba Inu’s that they were needed to separate “good dogs from the bad”.  Are they just that? Divisive virtual slaughtering grounds where dogs were set free to be primal and wild for the sake of real world socilical rank? Is this a sick twisted surveillance state that citizens blindly follow since birth. After all, only generations of Shibu Islanders believe in the ARI. Not the Labs of Canine-da.

Because, dogs want a reason to put other dogs down. If you have spots that don’t match the color of the rest of your fur you better hide them or get thrown in deep shit.

I found these themes of Shiba Inu were too on the nose for me. I’m glad the game focuses on provoking discussion and not reference humor and dog puns. The writing isn’t eye rolling, but there were many times where I “got it”. This is a game about class and a flawed social system where dogs look at dogs for what you are and not who you are. I’ve seen it many times in every form of media there is and such a topic, I know, will never go away.

I would have liked some extra meat from Shiba Inu when it came to the discussion of social class. Instead I received an info dump that I’ve read many times before with different wording and wanted to finish.

I completed Shiba Inu 3 times and achieved three different endings. The first a neutral which fueled me to load from the last save file as I wanted a better ending for Syd. The second was a bad ending. (Proving to myself that I’m tremendously rusty within the world of VNs.) I enjoyed this ending and the steps Syd took to get here, it didn’t distract or make me feel cheated by the events I went through in the past hours. But I still felt bad for what I put Syd through, the poor girl doesn’t deserve the extra mental strain I gave her so I began a new game. The third time was the charm and I unlocked the deluxe ending. Afterwards I was a happy and content Ari who decided to play again later to unlock the rest of the secrets and endings.

I quite enjoyed Syd’s character, far from perfect nor unlikeable. Syd’s many flaws and past is quickly established. While we know that upon return to Shibu Island Syd won’t stray from her mission, we always want her to be the better dog she wants to be. Both to unlock that good ending and find forgiveness. She also has a breaking point. We don’t see it until the third act, proof of her resilience and stress management. But you want to keep her away from that ledge before she does something rash, damaging, or even accepting and receives a bad or neutral ending in return.

Max was my least favorite character. He’s the dog that Syd relies on for safety, shelter, and friendship upon her return to Shiba Inu. However the only word that comes to mind about him is “protective”. We don’t see him much nor does he get a lot of screentime. Even so I would’ve liked for his and Syd’s relationship to have been fleshed out more as maybe then I would have appreciated his character more.

Meanwhile Quei-Li is the biggest sweetheart who I couldn’t help but love. When she’s angry and bares her fangs I feel like I truly fucked up. When she’s happy, I’m happy. I never once found a reason to lie to her about my intentions and trusted her from the moment I met her. ‘A mistake! How can you trust somedog as shady as this Lab you’ve only just met.’ you may say. Well I say, how dare you say no to that face?

(P.S. To the devs of Shiba Inu, Quilly was adorable and looks like an absolute sweetheart)

As for the “villains” you encounter I find trouble pinning that word on them. The real villain is the ARI and the scum who put this whole divisive system in place. Syd’s other attackers aren’t truly looking for revenge. They’re just angry. You want to clear up any misunderstanding they may have and earn their forgiveness. I personally love it when media does this. Villains rock and Thanos did nothing wrong! But you don’t always need a “bad guy”. Everydog makes mistakes and sometimes it can bring out the worst in a dog. Yet that doesn’t make anydog awful for living life, fucking up, and wanting to genuinely make amends.

Shibu Inu’s art throws me off. I am a whore for backgrounds and I can stare at this game’s background art for a solid amount of time. However it’s the character models that bothers me. There were times where I mistook a character for a real dog before noticing the brushstrokes. When consulting my artist friends, none of whom draw in this style so I took their opinion with a grain of salt, they said the models looked to be photos of real dogs thrown into a filter. I’m unsure about that but I do know that the clothing on the dogs are so ill-fitting it appears completely photoshopped.

The music and sound effects are fitting for the game. It’s nothing that I will return to listen to on YouTube during daily activities. But it fit the game well and did its job.

Overall, I found A Summer With The Shiba Inu a flawed game. Not worth the $10 asking price, maybe a $7 at the most. There were many times where I thought “this can be better, that can be better”, while getting vibes from other VNs I’ve played and enjoyed, both indie and AAA, and thinking about how this game could improve by learning from such titles. Shiba Inu has the right ideas in many ways and I want to see this concept returned to by the team after they gain more experience.

I know I’m not one to talk as I’m far below every skill level that goes into creating a game. But when I play and talk about an indie the last thing I want is to discourage any person with a passion. I undoubtedly want more of this concept and Quill Studios and I will be keeping my eye on them. Because I can see something special within this game, it’s up to team Quill to unlock that. And I will be returning to them in the future with their next release.

Do I think you should pay Shiba Inu, it depends on who you are.

But did I enjoy myself during the four hours I spent with Syd in her world. Guiding her down a better path in hopes of turning her into a better dog.

Bork yeah I did.

PROS
Enjoyable characters (Quei-li the goodest of girls)
Well thought out alternative universe with believable settings
A story and mystery that's simple and easy to follow and doesn't overstay its welcome
Solid backgrounds that can serve as wallpaper material
Dog puns
CONS
Info dumps that drag
Maybe lazy artwork
Not worth the full $10 asking price
5.5