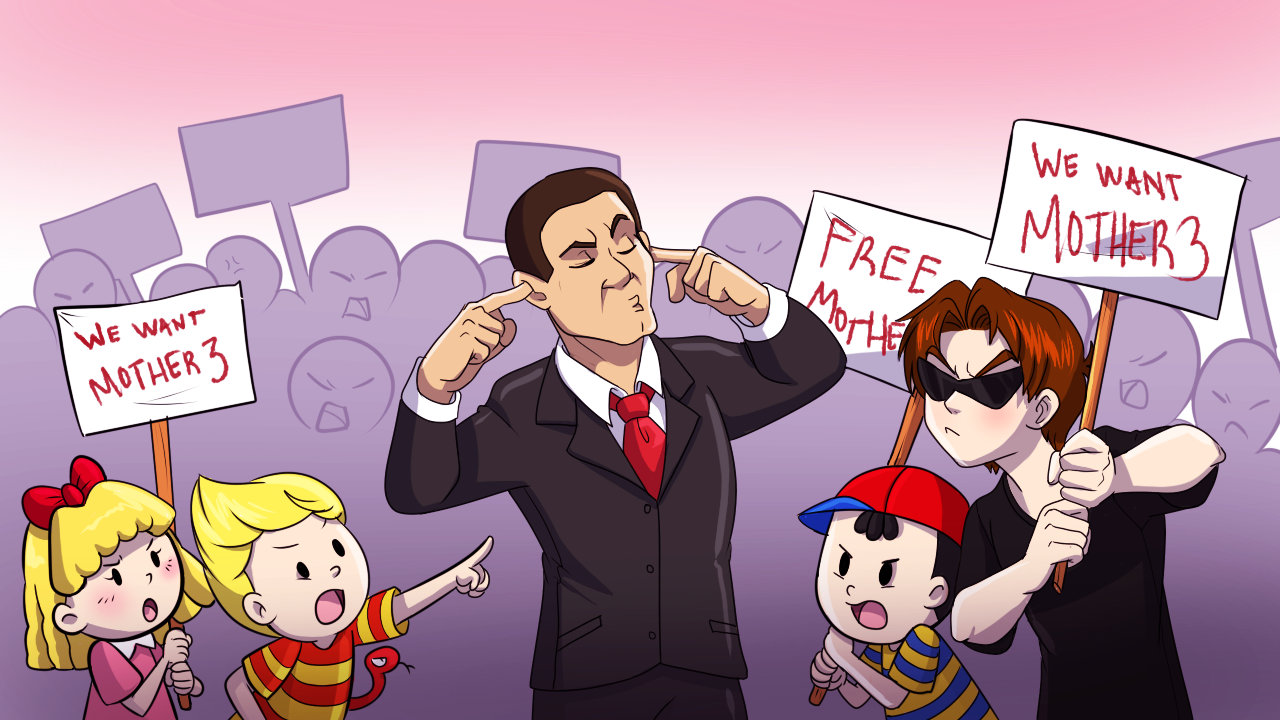 I awoke yesterday morning to several twitter notifications of urgency, people screaming “Holy shit! Nick did you see this” obviously in my waking up at 6 am head I really had no idea what was going on, opening the app I was directed to a tweet from former Nintendo hot shot Reggie Fils-Aime.

So, you may be wondering where this image came from, it goes all the way back to the original days of Unboxed when it was just a video series here on Youtube. Back in those days, I wanted to give my videos just a little bit more flair I sought the help of an artist to draw thumbnails, usually featuring myself involved with the game in question. I found an amazing artist by the name of Feri Gonzalez who would end up making a lot of artwork back in the early days.

Feri was actually the one who came up with the design for how I should look on these images and I loved the design so much I basically stuck with it even when Feri was no longer working on the artwork. So if you were ever wondering where the idea for my Enigma avatar came from, here it is.

So what about the image in question;

2016 marked the 10th Anniversary of Mother 3’s release in Japan and to celebrate I was going to do an episode about the game and more specifically its lack of localization. It was going to be under my “WTF Happened?!” a sub-series that I would do from time to time looking at things like Rareware and Doom 3, I even made promos to create anticipation for the episode.

So when it came down to the artwork it was obvious what we needed to do, despite continuous demand over the past decade it was clear that Reggie and Nintendo America had no desire to release the game and it was almost like Reggie was sticking his fingers in his ears going “Lalalala I can’t hear you”. So that’s what we did. I knew I needed Lucas, and because I just love them so much I also got Ness and Paula there as well.

The video was released in April 2016 and it is still one of the most successful videos I have ever made, at just under 20,000 views. Looking back there is so much I wish I could do with it, the camera isn’t properly focused, the audio balancing needs some work and the images I used at the end are upscaled poorly.

In the 6 years since I released that video, there has been no sign of an International Mother 3 release but Reggie would step down as President of NoA in 2019 and be replaced by Doug Bowser. To promote his brand new autobiography Disrupting the Game, Reggie has been a lot more outspoken about his time at Nintendo revealing such nuggets as his dislike for the Game Boy Micro, his belief Metroid Other M would be a game-changer for the series and of course Why Mother 3 never got localized. Even when he no longer works for the company, he’s still putting the marketing spin on everything, suggesting it was all about timing as, by the game’s release in 2006, the DS had already been out for 2 years. He even went on to mention that there was serious discussion about bringing the game out during the Wii U, even having extensive discussions with Iwata on whether it was possible.

“And who knows? If Mr. Iwata had not passed away, if maybe the Wii U had done better in the marketplace, maybe the Mother 3 game would have made it at that point. So there were certainly conversations, but it would have needed to have been done the right way.”

Is Reggie blaming the lack of Mother 3 on Iwata dying and the Wii U’s poor sales? I’m sure he didn’t mean it to sound like that because let’s be honest here, the “right time” is anytime. If Mother 3 was announced yesterday on Mother’s Day for the eShop worldwide, Nintendo would have to apologise several hours later for the eShop crashing globally. Personally, it seems Reggie and the folks over at Nintendo were seriously overthinking it, Nintendo fans, Earthbound fans would have been all over it the minute it was announced, just look at what happened when the first two games were announced for Switch Online.

It has now been 16 years since Mother 3 was released in Japan, 16 years of petitions, fan translations and demand has yet to die down. Over the last few years, we have seen other games that were once Japanese only finally getting localized, like Seiken Densetsu 3, released in 1995 and never localized for pretty much the same reason Mother 3 (supposedly) was and that was the impending release of a new console would finally see it released in English in 2019 with a full-blown remake the next year. This year also saw the announcement that Live A Live, another Square SNES RPG released in 1994 will finally see a global release later this year in a 2D-HD Remake utilising the Octopath Traveller engine.

Basically what I’m saying is, that it is never too late to finally see a release. We have a script thanks to the amazing fan-translators and every year more and more people find out about this elusive title, or who knows maybe we could finally see a remake like in this tribute video

Whatever happens, let it be known that we never gave up, we never stopped believing and maybe ….one day….

We could all have a Happy Mothers Day.