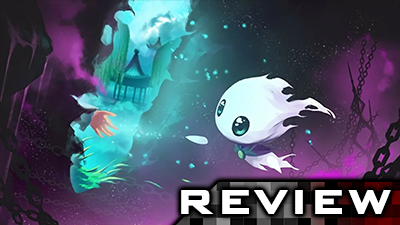 I discovered Evergate a while back and was immediately drawn in by its design, the game had this soft uplifting feel about it. So I was surprised when the game showed up in the “Blink and you’ll miss it” sizzle reel during Nintendo’s Indie World. The game is releasing on Switch first before arriving on PC and other platforms sometime later.

The game surrounds Ki, a tiny little spirit arriving back in the afterlife, but just before they are sent back to Earth for reincarnation, dark spirits invade the afterlife, corrupt the Evergate and send Ki into somebody’s memories. You utilise the Soulflane, a beam of light that Ki can bounce off objects to help her traverse the levels.

The game starts off simply enough with gems that help her bound higher, but fairly soon you get all kinds of new trinkets, ones that burn, ones that build platforms and ones that transport you. The game doesn’t offer much in the way of introductions or tutorials so you are left up to your own devices to figure things out.

Accompanying Evergate’s Ori-inspired design is a hauntingly beautiful soundtrack which gives the memories seen throughout the levels that little extra flair. The memories have you travel to several different eras and locations like the ancient Chinese city to the mountains of Alaska, basically what I am trying to say is that they’ve got presentation down.

I can’t say the same for the actual gameplay though, the main crux of the game has Ki jumping over platforms to reach the goal and they need to use the Soulflame reflect it against reflective surfaces while also lined up with a specific trinket. The game will go into slow-mo so you can line up your shot but soon enough levels get extremely complicated with reflective surfaces that break after one use so be prepared for trial and error, A LOT of trial and error and restarting levels as the game throws new mechanic after new mechanic into the fray like killer crows and rotating platforms. While it can be satisfying when you finally figure out a puzzle that’s been irking you for 20 minutes, having to constantly repeat a level because your aiming was slightly off or you missed that jump by “that” much can make you wonder why you are even continuing on.

But for those who like a real challenge with their platformers like Super Meat Boy or the B-Sides in Celeste, Evergate will certainly satisfy that itch. Completionists will have an absolute crazy time getting each levels trinkets, but it really is a hauntingly beautiful game that I just couldn’t get into myself.