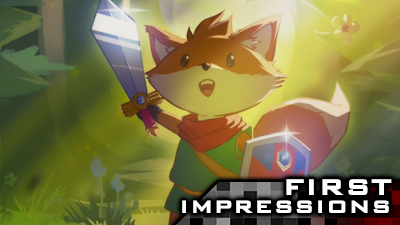 Tunic is a brand new game being developed by Andrew Shouldice and being published by Finji, it’s an isometric game with some clear inspiration with Legend of Zelda except you play as an adorable little fox. There isn’t much narrative presented in our short taste with the game as all text in the game is presented in some sort of faux-ancient language. You wander through grass and bushes that respond like you are some sort of rubbery bouncy castle finding the hallmarks of all Zelda clones in treasure chests and hearts as health pickups.

Although the first time playing the game I didn’t once get an enemy drop hearts whatsoever, but I found the exact opposite the second time around where everyone was giving me hearts….until the game crashed that is. While most of the inspiration from Zelda has been taken from the original titles, one major aspect from the 3D titles, that is lock-on combat has been implemented too and it works fairly well. Combat is simple to pick up and play with a roll dodge and shield to help you along. I also got a nice laugh out of the legit road blocks set up all over the map representing areas not finished yet.

The demo will not set you back too long, with you easily able to beat the whole thing in 10-20 minutes, but it is a gorgeous little game with this real soft lighting feel, the kind you get walking through the woods and seeing the sunlight creeps through the trees. Tunic is set for release later this year on PC and Xbox One as a console exclusive, although I highly doubt that will be the situation for long.