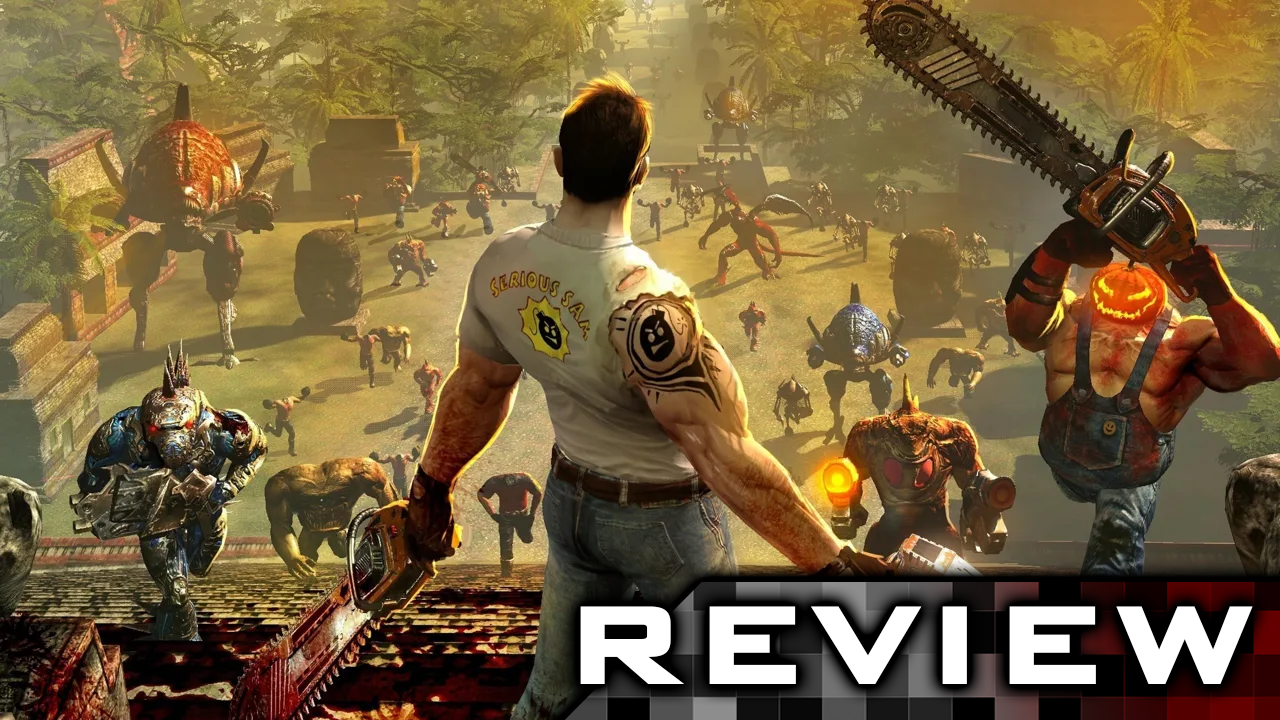 Serious Sam has been a series that has never taken itself too…well, serious, I played the HD remake of the original on the Xbox 360 several years ago and found it to be an absolute blast. You were just a guy with all the weapons in the world mowing down the craziest designed aliens in the world, there was nothing better than launching a cannonball into a group of those screaming headless guys with bombs to their hands.

This time around he’s even not alone, Sam and his team at the Alien Artifact Acquisition (the other AAA) are in Rome to acquire the Holy Grain which is inside the Arc of the Covenant, which itself is an alien artefact. If that doesn’t make sense to you, don’t worry it doesn’t really get in the way of all the alien killing you’ll be doing. Your team consist of all the cliches, the smooth-talking black guy, the foul mouth gun touting Mexican, the badass women in aviators that the main character has surely done the nasty with and of course, Kenny.

I have to give major props to your teammates as well because unlike so many other games, they are actually useful during combat.  Especially during harrier moments when you seemingly have everything running towards you its nice to know your team will be actually shooting the enemies rather than just randomly all over the place. However, that is really as far as my praise can go because my god this game can CHUG!

No matter what settings I changed, no matter how low the resolution or presets I set it too, my poor graphics card gets an absolute beating from this title. The game even opens up on fighting a giant horde of monsters reminiscent of the ending of Avengers Endgame and the game will slow down to like 10 frames a second. Thankfully, it cuts away after 30 or so seconds but even then the game’s performance is just pitiful, textures not loading properly, audio cutting out and it just refuses to keep a decent framerate to the point where even just turning can be an exhaustive effort.

The design of the world and the characters leave much to be desired as well, the enemies look like they were taken right out of the previous Serious Sam released back in 2011 and as for the level design, it honestly just looks like Croteam just copy-pasted levels from The Talos Principle and called it a day. Enemy encounters don’t really change things up and just give us bigger and bigger waves of enemies which, no surprise, makes the framerate chug even worse. It’s bad enough just trying to get a lock on where the Screaming Kamikze’s are running from thanks to the audio without them blurring together with all the enemy enemies.

I honestly want to like Serious Sam 4, it has been almost a decade since the last title came out and there are definitely some good points, the characters and story are so bad it’s actually hilarious, especially Kenny who is basically Woody Allen crossed with a wet sock and the weapons do have the right amount of oomph, the way a double shotgun clears an area or mowing down the big guys with dual-wielding chain guns is an absolute dream. But you wake up from that dream quick smart with just how badly the game works, even after a hotfix was released while writing this review did I find the game still not running properly. Admittedly my rig isn’t the newest at the current moment, but a quick glance on the Steam forums show that even people with the latest RTX’s are having serious issues getting this to run.

Serious Sam 4 may have some potential, but right now I am serious when I say give this game a pass.