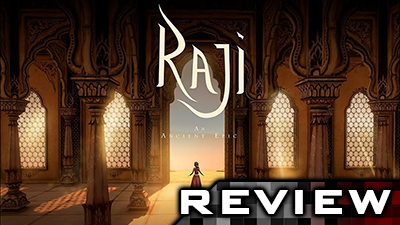 While we have seen many different independent studios crop up all across the world in many different countries, India surprisingly hasn’t really been one of them. It is a shame considering the rich history and culture the country has to offer that we haven’t seen more studios arise from the subcontinent but Nodding Head Games hopes to change that with their brand new game, Raji: An Ancient Epic, releasing on the Switch as part of their Indie World Megadrop this past week.

The game tells the story of Raji and her younger brother Golu who work as part of a travelling carnival until one day it is ravaged by demons and Golu is kidnapped. The story is told through shadow puppets while it is also narrated in game by the Hindu gods Duhra and Vishnu who are watching over Raji on her journey to save her brother, they also bestow upon her weapons like a staff and bow.

I feel it is safe to assume that most people playing this game will only have a truly elementary understanding of the Hindu faith, hell most people who say the most exposure they have to it is watching Apu on the Simpsons. This is where the game shines as it features an amazing representation of India culture, featuring snippets of Hindu lore through artwork narrated by the gods as Sitar music plays in the background.

The game plays similarly to the original God of Wars with fixed moving cameras over a 3D world, although the camera feels incredibly far away making Raji almost a speck on the map. Combat is a standard affair with normal/heavy attacks and the dodge button, but Raji can also pull out some Prince of Persia moves with her wall jumos and swinging around poles to attack the beasts that show up. The game also utilises an intriguing health bar, all the characters health is set in a circle around themselves.

The game does lack that final polish however, the game only allows you to jump when you are at a ledge but even then I found Raji would just miss grabbing hold like she wasn’t in the mood to do so. I also find Rajio moved at a fairly sluggish pace like shes constantly wading through mud. During the first boss battle, I was getting my butt whipped because I got caught in a corner, until IT got caught in one instead and I just kept shooting at it. Audio and performance issues also plague the game at times with framerate and audio skipping. Plus, while most of the voice actors in the game are tolerable, there was something off putting with Raji’s voice actress with her sounding like an Indian character in a Nick Jr cartoon.

While it is clear that Kratos’s journeys inspired this game it lacks the flair and intensity of those titles and thankfully the quick time events too, there isn’t much exploration as well with the game being a fairly strict linear narrative only lasting a few hours at best. Those hours though are filled with some amazing sights from a world that seriously needs more exposure in gaming. While the game doesn’t offer anything new, with mechanics taken from Prince of Persia and God of War, the rich Hindu mythology is a sight sure to amaze.