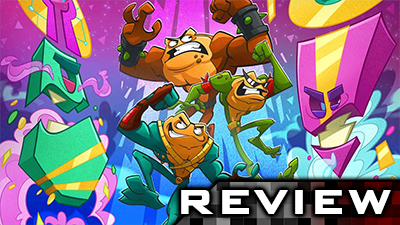 Take note, it has taken almost 20 years but Microsoft has finally realized “Hey guys, don’t we like own ALL these Rareware IPs? Maybe we should do something with them” and with that Battletoads has made a come back. For anyone too young to remember, Battletoads was one of Rare’s first original titles, releasing in 1991 on the NES it was one of best looking and most difficult games released for the system. The series would see several sequels and spin-offs with titles like Double Dragon and even an arcade release in 1994 before fading away into obscurity when Rare started working on titles like Donkey Kong.

This is the basis for the brand new game, which is just another in a long line of games that use the name of the original, something me and my filing system hate very much. Apparently, our three roided up amphibians, Pimple, Zits and Rash have been locked in a simulator bunker for 26 years, the same time since the last release and have emerged into a world where they are completely forgotten. Yearning to be world famous again, they team up with the Dark Queen to defeat the evil and effeminate Topians that locked them all away.

Much like the original title, Battletoads plays like a 2.5D Beat-em-up, I for one am a huge fan of this art style especially in games like Streets of Rage 4 the only issue with these types of games is continuously missing your opponent on the 3D plane. You can select which of the 3 toads you want to play with (I picked Rash for obvious reasons), but in single player mode, there really isn’t any point to it. If your character dies, one of the other two toads takes their place while they rest for 30 seconds, if all 3 of the toads die then it is game over.

The original Battletoads was remembered for being one of the hardest games on the NES, with the Turbo Tunnel being especially brutal. It returns in this game but with a few major tweaks, firstly the camera is behind you as you drive and the game thankfully has checkpoints, ones that will give you encouragement when you die. However, that doesn’t mean the game is any easier, this may be because I don’t really play a lot of beat-em-ups but I found the controls incredibly hard to work around. The tongue mechanic is a great touch being able to lasso enemies with it or jump to background platforms, but half the time I kept forgetting which of the button combinations to press so my Toad was just hanging there with his tongue out. But even weirder in regards to the controls, I found the vibration to be incredibly intense, pulsating hard all the time during fights. I’m talking girlfriend satisfying levels of intensity.

Battletoads is clearly a game designed to be played with other people, while playing through the levels solo I found myself constantly being overwhelmed on all sides with more and more enemies just taking huge chunks of your life bar, having to dodge more incoming projectiles and break their guards, it became a huge headache just trying to advance anywhere. While the game does offer local co-op, what surprised me is the complete lack of online. Even Streets of Rage 4 allows for 2 players teaming up online and considering the situation we are in right now, lacking online co-op especially these days, is a serious failure in my book.

While the game is a beat em up at heart, that hasn’t stopped the game going completely off the wall and throwing everything from platforming puzzles to a full-blown twin-stick Bullet Hell Shooter into the game, this is accompanied by self-aware dialogue that ends up being 50:50 between hilarious and cringe worthy. The entire game feels like a jumbled schizophrenic mess where they felt the beat-em-up sections on their own weren’t enough to carry a new Battletoads game and chuck a whole bunch of random affairs into the second half of the game, some work like the aforementioned Bullet Hell levels and others just frustrated and confused me like the elemental Jeff slide.

There is the semblance of a good game here with the 2D art style and mechanics like swapping between the fore and background but it is just stuffed with so much extra padding, that I wouldn’t blame you if you went back to Streets of Rage 4 or River City Girls for your Beat-Em-Up fix.

PROS
Superb 2D Artstyle
Hilarious Fourth Wall Breaking Moments
At its core, a functional Beat-Em-Up Game
CONS
Writing can be just as cringy as it is funny
Playing solo can prove difficult
No online Co-op
6