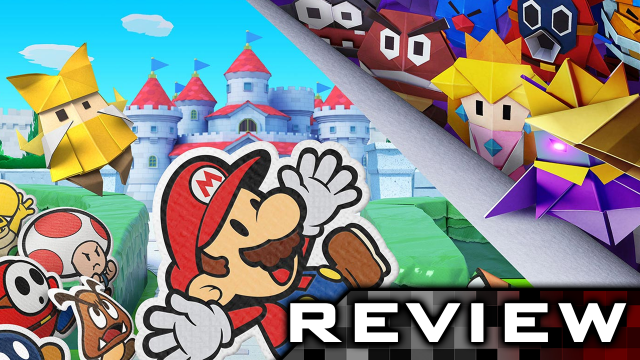 There are certain franchises that have one specific title that is put on a pedestal, like lightning in the bottle, the perfect storm, THIS title is the best game in the series and nothing has or ever would surpass it, and for some reason, they all seem to be on the Gamecube. Even after 20 years, there are people who will swear up and down that Smash Bros Melee is the greatest title in the series, so much so that they would mod the sequel to play more like it. Then there is Paper Mario, the RPG papercraft spinoff has existed since the N64, spawning several sequels with the Gamecube’s Thousand Year Door perceived by many to be the best in the series.

To prepare myself for this review and because it had been a while since I last checked it out, I popped in Thousand Year Door for a playthrough and I can see why people hold this game in high regard. You have a wide number of characters joining you, each with their own abilities necessary for your journey to collect several stars across a diverse set of worlds. But what stood out the most was the combat, set on a theatre stage, complete with a cheering (and sometimes rambunctious) audience, falling apart sets and many challenges to achieve the best moves.

The sequels haven’t seen the same level of success, Super Paper Mario adopted a more platforming style of combat with a new rotate world mechanic and both Sticker Star and Color Splash adopting a trading card system of combat. All future titles seemingly got rid of experience points, levelling up and the combat wasn’t as in-depth compared to Thousand Year Door. However recent titles have ramped up the presentation, taken the game away from a side-scrolling set up to a full-blown papercraft world.

The Origami King opens up on Mario and Luigi arriving at the palace for an Origami Festival, only to find the place abandoned. It’s only after exploring do they find Peach has been turned to origami, Bowser has been folded up into a tiny piece of paper and all his minions have been turned into origami as well. After a quick trip to the dungeon, we uncover our companion for this game, the little origami fairy Olivia. We find her through the use of the “10000 Fold Arms” much like Colour Splash borrowed from the new kid in Splatoon, Mario’s doing it again and this time with ARMS.

We discover the kingdom and Peach have been overtaken by Olivia’s brother Olly, complete with hair folded down over one eye just to show you just evil and angsty he is. He proceeds to wrap the castle in streamers and flys away with it. It’s up to Olivia and Mario to remove the several streamers and save the kingdom.

Origami King plays a lot like Color Splash, with a giant papercraft world to explore that is now littered with origami versions of enemies, and I’m not gonna lie these new designs are actually pretty creative and a touch creepy if I do say so myself. There are flat versions of enemies too, but everyone’s decided to put their differences aside in the face of a common enemy. Bits of the world have also been just straight up chewed up, by what exactly? By Giant Paper Mache Goombas and its fascinating seeing the construct of these creatures, complete with wire holding them together, the same can be said for chunks of the world that are now an empty void with coathanger wire that you need to throw confetti on to repair. Confetti is found literally everywhere, much like Color Splash you acquire the world repairing element by wacking everything in sight

As for combat, Color Splash’s card system did leave a lot to be desired. But at least it was straight forward. Origami, on the other hand, wants to turn every boss fight into its own puzzle. While the staple action commands are still present, move sets have been reduced to just Boots and Hammers, no Special Moves. Battles are played out on this ring with Mario in the middle with enemies splayed out in rows and columns and it is up to you, in a limited amount of moves with a ticking clock, to arrange your opponents to achieve maximum damage. With this system, the real challenge is lining up your enemies properly, making the actual combat feel redundant. It is even worse when it comes to Boss Battles, during those the boss is in the middle and you have to find your way to them via arrows that lead to the right combination to attack. Fortunately, you are able to gain support by throwing great gobs of cash everywhere.

Origami King has an abundance of two things, money and Toads, there isn’t a moment you are not earning moolah and by the first hour, I had already hit over 10K. Toads, on the other hand, have all met the fate of Olly and have ended up folded, scrunched and stuffed in all sorts of places, there is even a Toad Tracker that utilises HD Rumble to help locate them from a faint reading to they are right beneath you.

The varied sensitivity works really well in looking for them, and you are going to want to find them, as they have brought back one feature of Thousand Year Door….kind of. Your battles are watched on by an ever growing audience of Toads who will even help you out if you throw enough coins there way, these really help in Boss Battles as it allows an arrow on the screen to plan your moves properly. The amount of money you find is so staggering, and it is so easy to buy new weapons, it ALMOST makes up for the degradation of fancier boots and hammers……almost.

As well as HD Rumble the game utilises motion controls for some of its more special moves. Using the extend-o arms require certain controls like hitting and pulling, while they can be turned off I honestly found it more reliable using them over the thumbstick.

One of the most missed features from previous Paper titles is the lack of a party joining you on your journey, thankfully Origami King has brought that back…..kind of (kind of). You will have characters join you like a Bob-omb with amnesia or an archeologist Toad, but they don’t stick around for long and you don’t even control them in battle. There was a moment where we were blocked by boulders and the Bob-omb wondered what they should do.

Yeah it wasn’t lost on me either

If it sounds like I’m continuously knocking on the game, it’s only because it is such a mixed bag. The world is absolutely stunning, especially the new enemy designs and the completionist in me loves finding all the Toads and holes to fill. But on the other hand, the game is plagued with niggling issues including the complexity of the ring battle system potentially driving new players away. It isn’t fair to compare Origami King to Thousand Year Door though, cause quite frankly it’s not trying to be. The Paper Mario series has pretty much left the RPG genre in favour of a 3D Platformer/Strategy style. Instead of dismissing Origami King for what it isn’t, it should be appreciated for what its trying to be, problems aside there was some great moments here. The amazing new enemy designs, Olivia being adorable, Luigi’s quest to find the castle key and probably some of the darkest writing I’ve ever seen in a Mario game since Super Paper Mario. (although they lose me with giant cheerleading turtle)

Paper Mario may have started off as an RPG, but it has been folded into something entirely different now and while I will agree it is not to everyone’s liking, it’s almost impossible to smooth out a piece of paper after it’s been creased.