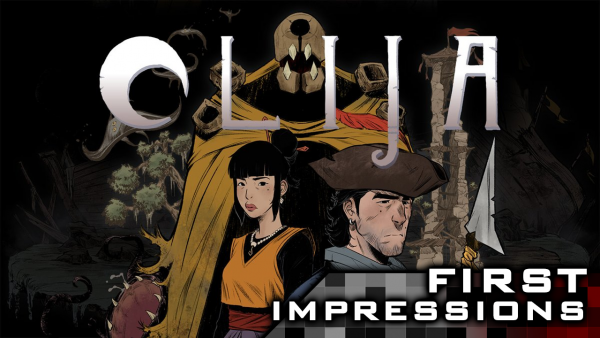 Announced during Devolver Digital’s Devolver Direct a few days ago, Olija is the brand new title from Skeleton Crew Games or more specifically ONE of its developers, Thomas Olsson. The game is presented in an old school rotoscoped style similar to Prince of Persia or Another World, it centres around Faraday, a sailor who washes up on a mysterious island at the mercy of Rottenwood Clan

What sets Olija apart is the mystical Harpoon of Legend, its no mere pointy stick, you are able to pierce enemies and objects and fling yourself in that direction. This allows for some amazing combat that has you flying all around taking out what ever is in your path. While it isn’t a Metroidvania per se, you will find yourself on many different paths and hidden surprises.

Combat is also full of surprises, the mystical harpoon is awesome but the aiming can be off some times, so instead of aiming at the boss it grapples onto that aggressive looking crate next to it. But during the demo you are also equipped with an automatic crossbow, and while you will have to recollect arrows it is still a great way to clear out areas. Even just the surroundings can be used to your advantage, I happened to fall from a considerable height only to land on an enemy with a satisfying “squelch”.

That’s one of the real stand outs of the game, while it looks incredibly pixelated, the movement and flow of the characters are next level in all its rotoscoped glory, even hitting an enemy to the ground will sometimes see them slowly stagger back up.

While our time with the swashbuckling harpoon flinging hero was short, I was sold on the game in just a few minutes. The combat is complex but easy to pick up and the Dead Cells meets Prince of Persia art style is really “in vogue” right now. The game is set for release later this year on both PC and Nintendo Switch, and I’ll give you three guesses which version I’ll be getting.