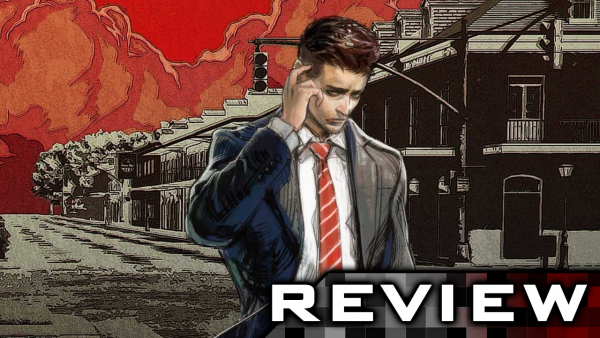 Deadly Premonition is one of those seriously polarizing games, you could either see it as pretentious gobshite or an eccentric title that should be held up during the “games as art” debate. Honestly, I’m really on the fence about the whole title, I found out about it several years ago only to discover that it never saw a release here in Australia. The game did have a PC version on Steam, but the port was so poorly designed it couldn’t even use an Xbox Controller properly. I finally got to truly experience the game on Switch when the sequel was announced. Delving into the adventures of FBI Agent Francis York Morgan, I found myself loving the investigation aspects, the combat was akin to Resident Evil 4 and most importantly the people you meet in this sleepy little town have some real character to them.

My biggest concern was trying to progress the story forward at times, and here is where I got some horrid flashbacks of playing the original Shenmue on Dreamcast. You are in a situation where you know where you need to go, but that certain location will only open several in-game hours down the track and unlike Ryo’s adventure, there aren’t arcade and gacha machines to pass the time.

Deadly Premonition 2: A Blessing in Disguise puts us back into the shoes of our favourite FBI Detective and his imaginary friend Zach, or it may be the other way round this time as he is interviewed in his dingy flat by fellow Special Agent Aaliyah Davis. The beginning of the game has her walk a specific path with you only moving the thumbstick like you are on rails, however, it seems there’s been a major accident down the line as the opening of the game is an absolute slog to get through.

You spend what feels like the first hour, in a seat looking around the house and asking Morgan, who has seen much better days, a series of questions as he continues to get blazed and reminiscent of previous cases including the one from the original game. Speaking about the original while the sequel does look better graphically many of the development shortcomings are still present, models still move janky and the lipsyncing is atrocious, thankfully it makes up for that with a voice cast turning it up to 11. Hearing Aaliyah trying to pull off a Deep Southern accent is hilarious. The conversations also require manual input so you will be continuously pushing the A button over and over.

After going through the introduction and an opening cinematic which reminds me of the one from True Blood, which is appropriate as the game opens up on Morgan in the town of LeCarre, Louisiana on the Mississippi River during his vacation, only to “surprise” walk into yet another bizarre murder case. While originally arriving in the state in a brand new hybrid car, it was stolen and all that was left behind was a skateboard, which will be your main mode of transport this game. Handling the skateboard is fairly easy, if not monotonous to do so as there are no options to jump, let alone do any gnarly tricks outside of a few courses.

Le Carre is a lot smaller in size in comparison to Greenvale from the original and navigating the town is a lot easier with the brand new overhead beacon and objective wayfinders everywhere. It may be small, but as soon as you step outside, performance drops drastically, loading is an absolute chore and the game crashed on me a few times, sometimes even just freezing on a loading screen. The issues with the framerate have been the biggest takeaway with the game so far, with initial reports suggesting that they will not be fixed. But SWERY has come out saying that “he’s going to fight with the producer to get something done” and that’s a real problem if a developer has to go bare knuckles with a publisher just to make sure their game will work properly. Honestly though with how the game looks, there really shouldn’t be any reason why this game shouldn’t be running smoothly and I would like to think that it would be fixed, but the producers of this game also handled the disastrous PC port of the original.

What I’m saying is, don’t hold your breath.

Performance aside, the game plays a lot like the original going all across the small town to solve the mystery by profiling crime scenes and mingling with the townsfolks and that is where the real magic of Deadly Premonition is, whether its the hotel worker with multiple personalities, or the sheriff who continuously pretends he’s in a movie trailer and especially the underwear-clad bar owner, there is no shortage of colourful personalities in Le Carre. One of the main standouts is your spunky new sidekick, Patricia Woods, who will travel with you throughout the game, but and this may be because of performance if you are running down the street too fast she will disappear and reappear right next to you. This can prove really jarring, especially with the camera in front of Morgan.

The sequel still has you following objectives, but this time it seems to cover every single movement they want you to do. Objectives like “opening a door”, “walk down the street”, “look at the map”, I would honestly not be surprised if “scratch your butt” was there too. There is still even the situation where you must wait for a certain time to approach certain objectives, but thankfully you can just go back to your hotel and select how long you want to sleep for. There are also side missions to keep you busy but some can we really bizarre and secretive, early on this kind motherly restaurant chef wants you to find ingredients to make a special dish she wants you to find some rice and I end up stumbling upon it, in a field, on the outskirts of town with no hint whatsoever, or trying to take care of some Killer Bees for the sheriff with no indicating where they would be.

The main objectives can be a mixed bag as well, in the beginning, you are required to earn a strike in a bowling alley, the only problem is the game’s performance prevent you from actually delivering a proper bowl. They have two meters to press at the right time one for strength and one for angle and naturally because the game is running at a snail’s pace, I found myself throwing more gutterballs then anything. In the end, I played it like I did back in the day with Wii Bowling, aim it on the right side with a left hook. Or, having to sleep several in-game days just so we can buy a certain meal only available on a Monday, required to progress the story.

Much like in the first game, you will spend time on the other side. You find yourself in the dark world throughout the story or being out past midnight. This world is filled with bizarre creatures brandishing giant gardening shears straight out of NightCry and the tranquillizer gun you are given at the beginning of the game turns into the one from Videodrome, hell it even mentions that.

That’s why, even with all the issues with performance and objectives that are more mystery than the game’s actual case, I still thoroughly enjoyed Deadly Premonition 2 and could barely put it down. The characters, York’s continuous Movie References, even the combat works a treat with no need for melee whatsoever. But, like the original, this game is gonna be just as polarizing, you can either look past the decade-old graphics or not, you can see Morgan as endearing or insane. But one thing you can’t call Deadly Premonition, is boring.

PROS
That "SWERY style" is still present as ever
York is still a riot to listen too
Amazing cast of characters
CONS
Performance can be pitiful
Objectives can be quite mysterious
If I hear "The Lord Hungers" one more time....
7.5