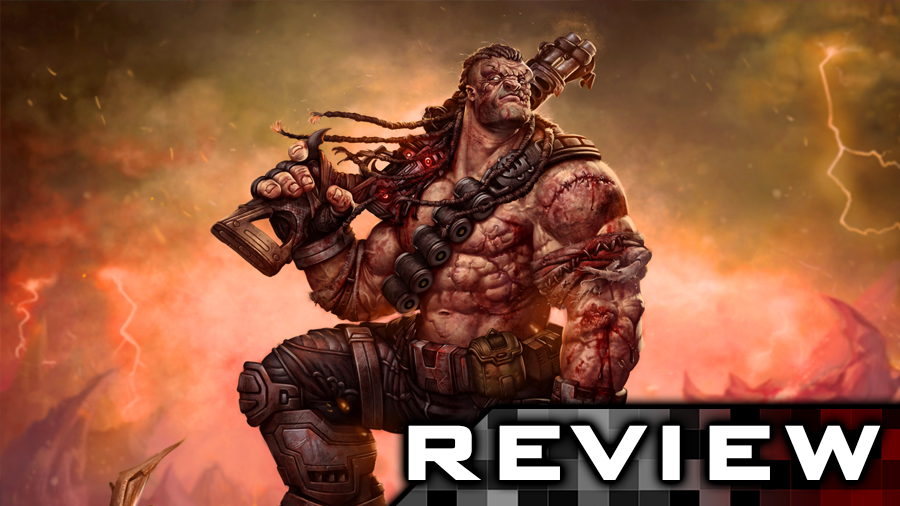 In the 90’s the term “DOOM Clone” was given to First Person Shooters following the runaway success of iD’s Demon Slaying Magnum Opus. It wasn’t always used negatively though as this era saw many great titles including Heretic, Blood and of course Duke Nukem 3D. Hellbound however is a DOOM Clone in the sense they actually tried to clone the game but something was contaminated in the test tube.

Hellbound wants you to think that it is a game inspired by the shooters of the 90’s, with all the twitchy finger, devasting weapons and bloodlust they were known for. But playing the game, I felt as far away from the 90’s as possible and just saw a game that was seriously trying way too hard.

It starts with the title screen that isn’t even pretending to be a ripoff of the DOOM logo, but I will give them one point, the game does play just like a 90’s game in one sense as there is no, I repeat NO CONTROLLER SUPPORT. In this day and age, especially with how cross platform game development is, there really is no reason whatsoever to exclude this feature.

On the gameplay side of things, you have level design seemingly taken from the cutting room floor of DOOM Eternal, I’ll be with a little less jumping and a few uninspired one-liners, so digging into Duke’s rubbish bin while we are at it, seemingly dropping F-bombs as much as other people use a comma. If a game like Hellbound was released in the 90’s it would undoubtedly be promoting itself by calling DOOM weak, they have a Double Shotgun? well, we have a TRIPLE Shotgun!

But that’s the thing, while promoting itself as a game inspired by the 90’s there is really nothing about this game that reminds me of that era. Shooters of that era were always fast paced with a trove of weaponry to play with, health and ammo littered everywhere so you could continue blazing through. Here, your main TWO guns really lack any sort of punch with them even having issues with the smallest enemies. The game promotes itself on its difficulty, but it is more cheap, with a lousy checkpoint system than difficult.

Performance wise, the game is even more of a nightmare. I wouldn’t say I have the beefiest rig, but I’ve been playing games on it now for several years with barely any issues. But with Hellbound, the game is continuously pausing for moments at a time and I found the only way to make the game run properly on my rig was turning down the visuals wayyy down. I’m talking graphic quality that would make the Switch cringe, and that’s just the graphics, load times are a real hassle with the game taking forever to load a save file, might explain why the game doesn’t utilise a Quick Save button.

That’s probably my biggest issue with Hellbound, just how much of a poser it wants to be. It wants to be DOOM so badly, it will give us the gruff protagonist but give him no personality whatsoever outside of saying fuck a lot. Halfway decent hellish inspired levels that are marred with graphical and performance issues and just the most generic metal music playing over it all as you plough through one of 5 different enemies. It wants to think its from the 90’s, but what shooter from then had ironsights? The only saving grace this game has is that it’s over quickly with a wet fart of an ending.

This game would like to think of itself as “Unapologetically 90’s” but really it just owes me an apology.