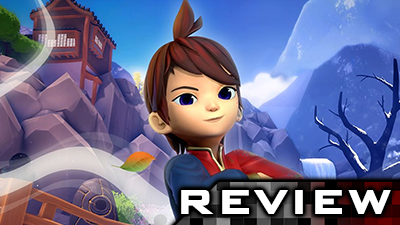 I’ve played many games over the years that could be charitably described as “Zelda Clones”, games like Okami, Beyond Good and Evil and even Darksiders were heavily influenced by the long running series. But in those cases the games at least changed up the formula enough to make it their own, Ary and the Secret of Seasons however doesn’t feel like a clone, it just feels like a Zelda Knockoff. Something you’d find at a Kmart in generic brand packaging.

Ary is a young girl from the village of Yule where she lives with her parents, her brother has gone missing and is feared dead and her mourning father is unable to hold his duty as the Guardian of Winter. In this world, all four seasons are protected over by Guardians and crystals, until the entire balance is thrown off by giant red crystals that fall from the sky and change the weather and an army of hyenas.

Ary is determined to take responsibility as guardian and hopefully find her brother as well, at first her mum is like “I can’t lose another child” but 5 minutes and a haircut later she’s all hugging and “make me proud”, I find it very frustrating when characters will just do a complete 180 at a drop of the hat with no build-up, But I find it more annoying when we bring in characters with no introduction whatsoever. As we start on our journey we meet a Panda Sensei and travelling merchant with no understanding who they are or how they know Ary.

The main feature of Ary is the ability to change seasons, usually, it will just appear as a small orb around you. But you are able to expand your powers thanks to monoliths around the area. This helps to create platforms out of ice or even walking underwater. The concept is actually pretty brilliant to be honest and its really cool seeing a winter wonderland suddenly turn into the middle of the Sahara at the press of a button.

However, while the main mechanic is undoubtedly interesting at its core, everything else feels like an unfinished mess. There are some well-designed towns to visit, but none of the buildings can be entered and people just stand like statues so they just feel like placeholders. All of the supporting cast feel incredibly wooden and two dimensional, the other guardians lose their season crystals after getting drunk on fruit juice at the meeting and forgive me for spoiling but we are introduced to a prince character who looks like a complete jerk but acts like a real sweetheart, until he suddenly turns on Ary and betrays her and I felt my intelligence be greatly insulted.

Combat isnt too bad, but if NPCs stood around too still than the enemies are even worse. They always stand in the same formation and there is barely any variety, most of the time it is the same enemies in the exact same location. You are supposed to use the season powers but there seems to be a slight delay which can make combat fairly hard to control. Another bizarre discrepancy is the lack of any death animations, if you run out of hearts or fall into a trap the screen just goes back and takes you to your previous checkpoint, while it’s nice to quickly get back into action its also just another way this game feels incomplete. Also Ary, I don’t care how many times you say it “Son of a Cow” is never gonna become a thing.

Graphically is another area where Ary falls flat, it’s clear they want to go for a Breath of the Wild meets Windwaker art style here. But it just lacks the graphical prowess to achieve that and ends up looking like an episode of Miraculous Ladybug, with just as much character. At the beginning of the game, Ary receives a scar on her cheek from a wayward hyena soldier, and yeah I’m still perplexed over that in itself, but the scar is so important that it is featured on the game’s boxart. But just a few hours in it’s upped and vanished on us and I honestly can’t tell if it’s on purpose or not

With some more time in the oven. Ary and the Secret of Seasons could be a stellar Zelda Clone. The dungeons offer some decent challenge with the seasonal powers and later on you get access to a seasonal slingshot which helps with strategies. But that doesn’t change how the game feels soulless, characters frozen like it’s winter everywhere, the sounds characters make during conversations, even things like the choice of font, the objectives hanging on screen all the time, even just Ary’s reactions to new tasks feel empty. There is definitely some potential here, just some polish could make this game really shine.