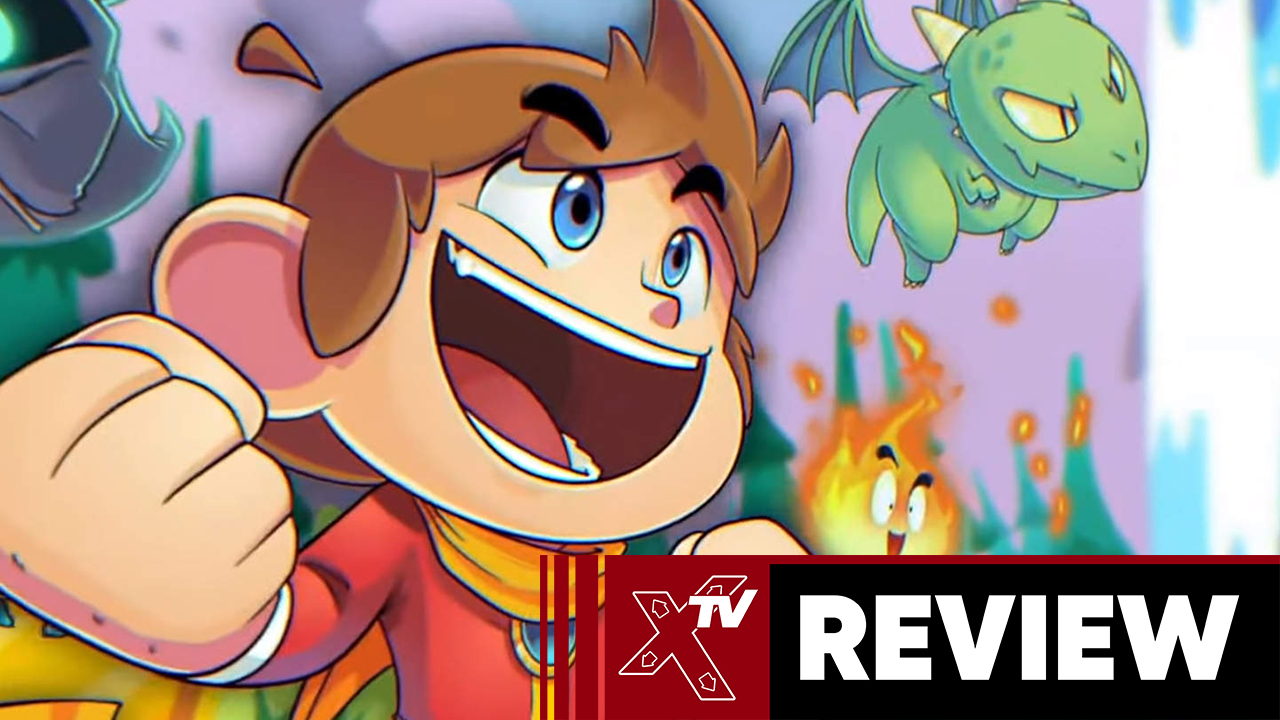 It’s great seeing Sega continuing this retro revival of franchises that are not named Sonic with new additions in the Panzer Dragoon and Streets of Rage series and now we are going back to one of Sega’s original franchises in Alex Kidd, for anyone not aware Alex was seen as Sega’s original mascot during the Master System days and appeared in several titles before vanishing around 1989. But after a 30 year hiatus, Alex is back with a remake of his original game Alex Kidd in Miracle World

At first glance the game looks an absolute treat, taking the original 8 bit trip and giving it a full artistic makeover. But if you really wanna play old school you can switch between the new graphics and the old Master System sprites at the press of a button, but soon enough all that color drains from your eyes as the game is a true 1 to 1 remake of the original, now why is that an issue you say, well because the original wasn’t exactly known for its fair difficulty.

Alex Kidd is one of THOSE platformers, where one hit kills you and your only attack, a good punch isn’t anything to phone home about, playing through this remake it’s clear to me why Sonic took his place as the face of the company as playing through this remake is just as difficult as playing the original. Usually when a game is remade or remastered it offers players fixes in the form of quality of life enhancements, the only thing that makes up for this game one hit death and frustrating hit detection is the option to turn on infinite lives which just results in you dying even more in that one cheap section. Even stunned bosses can still kill you if you move just a bit too close while punching them.

You do have access to a range of toys like a helicopter and a motorbike but like everything else the game will do everything to ruin that fun, these devices will be destroyed in one shot with no way of getting them back, it almost makes punching the boxes that contain money almost pointless, also you may want to avoid punching mystery boxes as most of the time a Grim Reaper will appear and hunt you down relentlessly until you leave the screen, the only real comfort is that the levels are fairly short with an Onigiri waiting for you at the end, or if you selected in the options, a hamburger.

Boss battles are another bizarre turn this game has made, instead of actually engaging in combat at first you compete in several rounds of RoShamBo, best out of 3 wins which usually boils down to a crap shoot. We do have actual boss battles later on in the game but they really are fairly basic with no real strategy. As I kept playing through this remake I was having less and less fun and just found myself dying more and more out of boredom, the platforming controls can be fairly finicky at times especially when aiming for small platforms. Even the swimming is off putting with the game constantly fighting against you to have Alex reach up to the surface

The game itself with unlimited lives will only last you a few hours at best, so if you really want to amp up the challenge turn back on lives, which then begs the question why you don’t just play the original on Sega Ages for 8 bucks. Outside of the brand new artwork, which is good don’t get me wrong, there really is nothing that sets this apart from the original back in 1986. Alex Kidd, like a lot of Sega’s forgotten franchises, deserves a second chance, but this isn’t one of them. There is so much more that can be done with this franchise to adapt it into the modern era, but if all Alex wants to do is relive the past, then he may as well stay there.