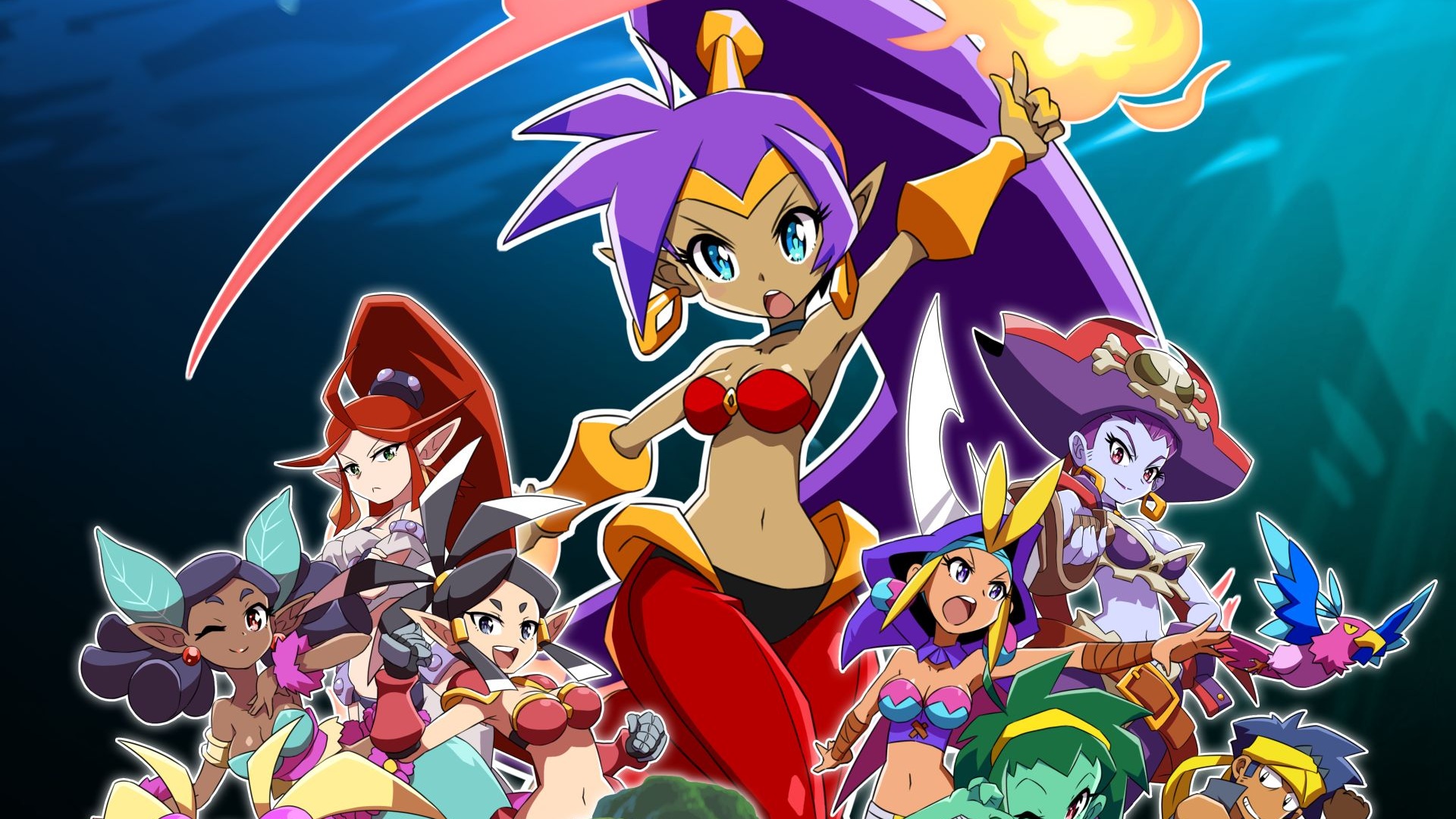 Four years after her successfully Kickstarted title, Half-Genie Hero was released. Everyone’s favourite purple-haired, hip-shaking, Smash Bros Hopeful Genie has returned in “Shantae and the Seven Sirens”. Now admittedly, this title has been out for several months on Apple Arcade, which was a thing that most of you had forgotten about until now. But with its release on PC and Consoles this past week, we finally get to check it out.

For the first time in the series, we don’t actually start in Scuttle Town, but instead, Shantae and her friends have been whisked away to a vacation on Paradise Island for a Half-Genie Festival. Yeah, turns out Shantae isn’t the only half magic lady in the world, and I have now discovered a whole new set of waifus.

Of course, as soon as you land things go completely tits up (and not in the good kind) and all of the other Half Genies vanish, leaving Shantae all alone. Which leads to her exploring the island and solving it’s mysteries.

Gameplay wise, the movement and controls is what we can expect from the Shantae series, with it pretty much unchanged from HGH. But this is where I voice my concerns. Four years ago, when I covered her latest title in “The Shantae Retrospective” I voiced my concern about how Shantae’s gameplay is slowly becoming stale.

Now look, I take no pleasure in saying this, I love Shantae, and I mean LOVE.

But to be fair, it isn’t like Seven Sirens is a complete clone of Half-Genie Hero, if anything it’s more of an amalgamation of the entire series. We have separate towns to explore, a feature that hasn’t been seen since the original on GBC and we see the return of aspects like the Squidsmith from Pirates Curse.

One of the biggest new additions is the introduction of animated cut scenes, handled by the studio behind Kill La Kill, TRIGGER. These are seen throughout the game to introduce boss battles and of course, the opening cinematic featuring music from Christina Vee, whose grunts, groans and screams voicing Shantae are just adorable.

Soon enough, surprise surprise, we run into Risky Boots. I’m now convinced it’s impossible to have a Shantae game without her, but she usually shows up throughout the game for a quick fight and is honestly more of a nuisance than any kind of threat.

One of the bigger changes is, while you still have dancing, they aren’t for transforming like in the previous titles. Instead, once you rescue each of the other half-genies they will fuse their magic with you, allowing you new abilities like revealing hidden platforms or bringing back life.

The animal transformations, however, are now used as passive moves like a dodge/dash move or a drill when you are up against the soft ground, but the new moves seemingly only have a few moments that are required. The reveal spell can actually show hidden gem containers, but really offer no hint where they are, so unless you are going to do it on every screen, it’s not something I’d go back for.

One of the biggest flaws of the Shantae series as a whole is how easy it is to break the difficulty in half. With the hair and pike ball upgrades in the past, bosses became an absolute cakewalk. Here it is so easy to grind gems and food, there wasn’t a time where I finished a dungeER, I MEAN “Labyrinth” without max gems, from there you just get the Hair Cream and Shampoo upgrades and you become a whipping machine. I did honestly feel after beating a few of the bosses thinking “was it supposed to be that easy”.

Unlike previous games that had you traversing all across the world, Seven Sirens adopts a much more Metroidvania style to its predecessors, unfortunately, the map layout leaves much to be desired, with other titles in the genre at least detailing certain landmarks, or giving people the ability to put markers where they want, in comparison Seven Sirens map is fairly bare-bones.

There are also periods where you have no idea what to do or where to go next, you could be travelling all across a dungeon trying to find that one switch you missed. For example, throughout the game, you come across these broken windmills that need to be FIXED, you need PARTS to fix them. So when you receive literal “nuts and bolts” you rush to the nearest windmill to fix em, right? WRONG! You need to go to a very specific windmill that isn’t made clear and fix THAT one and ONLY that one.

This is not me knocking the game, I had a lot of fun playing through Shantae’s latest journey. But I knew I was going to enjoy this, because I did 4 years before. Again, this is what terrifies me, Shantae is coming back again and again with the same basic concept, and I know this girl, I know this STUDIO has so much more potential.

Imagine teaming up with Skye, Bolo, Rotty and hell, even Risky in a squad-based RPG like Paper Mario.

Shantae has always had stellar music, maybe even a rhythm game like Cadence of Hyrule.

I want this girl to succeed, I want her to be recognised as one of the standout female character’s in gaming, up there with Samus and Alyx Vance and most importantly, I want her to finally receive her invitation. #Believe

Shantae and the Seven Sirens is still an adorable, enjoyable adventure and anyone who was a fan of her previous titles will surely enjoy this.