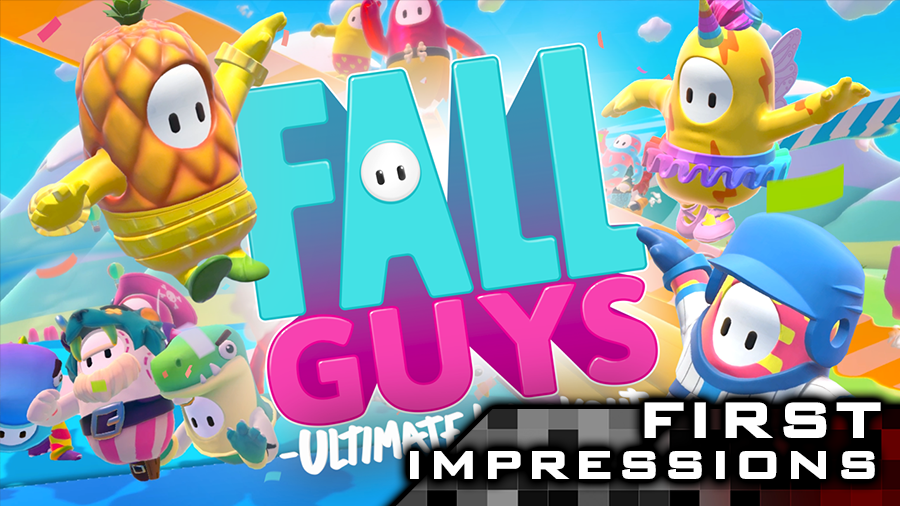 The folks over at Mediatonic and our good friends at Devolver Digital are attempting a new style of battle royale, Fall Guys is taking much inspiration from those physically insane game shows like Wipeout and Takeshi’s Castle (also known as MXC) and presents itself as a TV show with many different elimination stages until only one walks away with the crown.

You play as these bizarre looking blob creatures who have a fascination with spandex, are virtually indestructible and have a very bad center of gravity. Each of the levels will have you bouncing off everyone else for a mad dash for the finish as the creatures keep making this wooo sound. You start off with 60 contestants and after 5 rounds it is wittled down to the final few who will compete for the crown. These contestants can range from simply avoiding obstacales and reaching the finish line, to bizarre team versions of Hungry, Hungry Hippos

Unfortunately when we first hopped into the Beta, we had serious problems even getting into a match with our hapless little blob falling through the air waiting for a match. Investigation seem to suggest that there was an issue with Oceanic servers and we were unable to play until 12 hours after the Beta started. However once things were sorted out joining a match was fairly simple.

The game very much reminds me of The Simpsons episode where Mr. Burns finds out he has every single disease known to man and its described by his doctor as Three Stooges Syndrome, with everyone trying to reach a goal all at once there will be no end to the flailing and crowding. Team-based challenges can be even more hectic, whether be trying to jump through hoops or push a giant soccerball, teamwork is vital in these ones. There also seems to be a serious exploit in the Jinxed level, where hanging from a ledge prevents you from getting tagged.

However, there are parts that can prove tedious, which can be really damaging to the longevity of a Battle Royale game. In regards to the obstacle courses, you could see yourself having to wait for everyone else to finish and then the game puts you into spectator mode by default after being eliminated. Certain stages also require you to grab onto something, the Egg Scramble especially has you grabbing them to hurl in your team’s goal, but most of the time I found myself getting an egg hurled right out of my hands.

Certain stages can require actual skill like the obstacle course or eliminators like the memory game or the ones that remind of those levels from Super Mario Sunshine, and then their are the ones that are just plain cheap like the Falling Platform eliminator. Although that is nothing compared to the really anticlimactic ending level, Fall Mountain, which really just amounts to running up the hill fastest and grabbing the crown. Maybe some more obstacles that could send you all the way back down could offer a bit more excitement.

Longevity is gonna be the real question mark of this whole game and while we only got a taste of the levels in this Beta there will be 25 levels available at launch, however, we don’t know how often we will see new courses arrive, although the developers have promised a large number of levels later on. The biggest hurdle I believe is the fact a game like this is going for 20$, while that doesn’t sound like a lot, in comparison with Free to Play Battle Royale games like Apex Legends and the reigning king Fortnite, Fall Guys could see itself with an upward battle on its hands.

Having a price tag though doesn’t keep it from offering microtransactions, although the game’s currency, which is also earned in game, is only useful for cosmetic changes. However, unlike other games, Fall Guys don’t offer lootbox style mechanics but instead tells you exactly what you will unlock when you level up whether it’ll be a new colour scheme, pattern or headgear.

Fall Guys is still great light hearted fun and I enjoyed my few hours playing it. But some serious adjustments should be made to make it the game people keep coming back to.