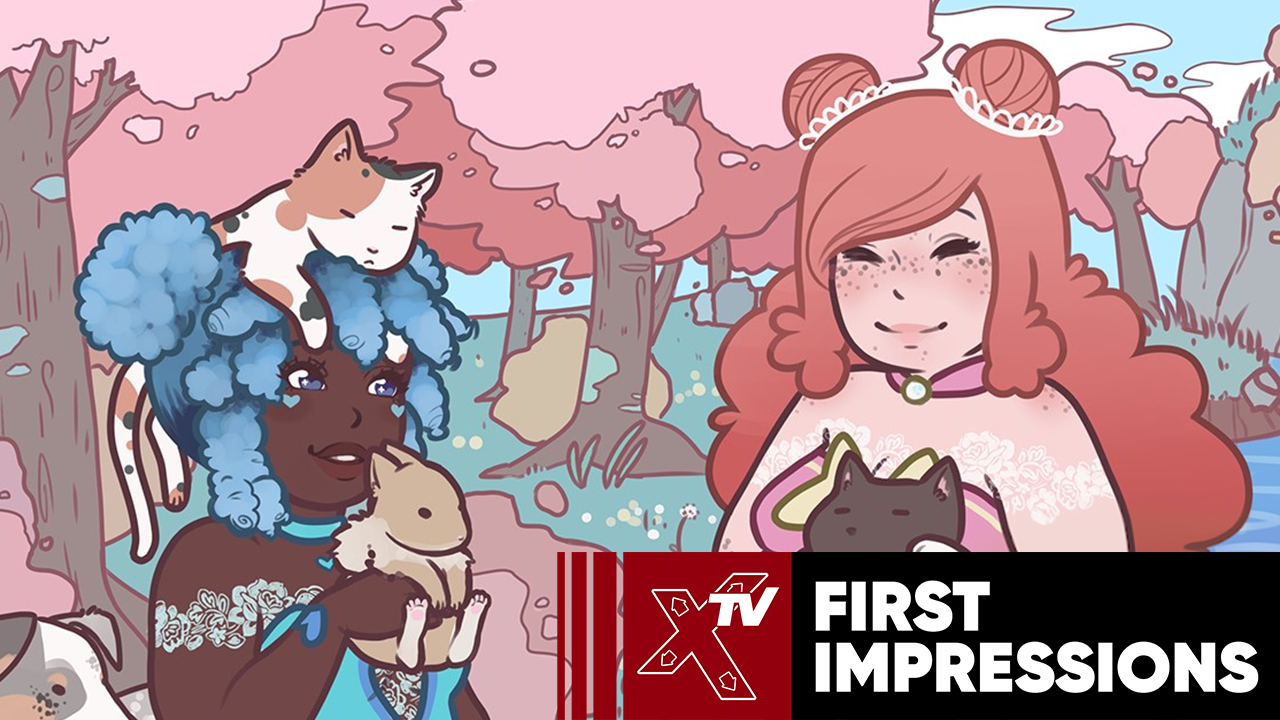 Ladies and gentlepeople of the jury, as you may or may not know, I am a dog person. Don’t believe me, you haven’t seen my camera roll…

However, I do appreciate cats. Even if I don’t understand them, I love the little floof balls. And while I’ve never been a huge part of the magical girl fandom and am a firm believer that Devilman Crybaby is a magical girl anime, fuck you fight me. I cannot ignore… the power… of cute.

Calico is a game where you, dear viewer, inherit your aunt’s cafe and start your new life among the kind residents of Heart Village. A cozy little village located in the center of a fittingly star shaped island. Oh yeah people, in case you haven’t noticed the candied pastel colors and adorable magical girls, this game diabetes sweet.

However, you may not spend much of your time in your new cafe, Calico. You can decorate the main and upper floors with different themed decor. And shrink down to the size of a mouse and mix ingredients to make yummy foods and fill your display case. You can also interact with guests and pets at your cafe whenever you feel like it. But you don’t have to be present at Calico at all times.

Much of your time will be exploring the island, unlocking different areas and items, helping your new friends, and much more. Don’t worry about being able to afford new products as your cafe will produce revenue while you’re away as long as your display cases are full. Prices will range based on the variety displayed.

There’s a new colorful resident at every corner. From the poppy mayor Kiva to fiery Ash and strange Oliver who may or may not be a back alley dealer. Feel free to pick your favorite as this game is full of charming personalities. However, some characters aren’t as fleshed out as others. You’ll likely find yourself eager to help your favorite character, while just wanting to get other missions over with for the rewards.

What about gameplay? Easily, what makes Calico so addicting is the amount of stuff that can be unlocked. New recipes and items for the cafe, clothes, and potions that can stop time and turn your hair into a magical void. Friends to meet and animals to give a home too.

I am completely biased when I say the animal missions are my favorite. I wasn’t expecting to open my home to so many furry friends. Offer me the possibility of a large snow fox living with me, hell yeah I’m going to complete that in a heartbeat. But a red panda?! Oh no… oh God… I can’t… it’s too cute! The best part about the animals, you can ride them!

One of the early quest of the game involves you obtaining a potion that can enlarge animals, transforming them into a mode of transportation. Don’t worry about losing them as they’ll find their way back to the cafe. Sometimes you think petting the doggo is enough. But then you ride the doggo around town, making deliveries, complete quests, and close the day playing fetch and call him a good boi!

There’s no other game worth playing…

Though, there is going to be a point where the game gets boring. I don’t think Calico has the same replayability as, say, Stardew Valley. That’s because Stardew Valley has enough variety and creative opportunity to keep you coming back. Calico does not because of how liner and scripted it is. You will play the game for a few hours, complete all the quest, unlock all the items, then you’ll be done.

Keep in mind there’s nothing wrong with that. There’s plenty of games I loved and haven’t touched in years. But if Calico doesn’t look appealing to you, this may be a main point to stay away from it.

The graphics of Calico punches you in the face. ‘Soda pop’ is the best way I can describe the art, bubbly and sweet in aesthetic appeal.Yet, the graphics do contain their problems. While the game does have amazing 2D artwork, the 3D graphics can be off putting at times. I prefer my characters to have more life to them. More expressions and dynamic poses when moving and sitting. I also prefer it if my characters aren’t crashing into objects and sinking into floors.

The camera is also an issue. When I started playing I used my keyboard and mouse, but it wasn’t as comfortable as the controller. It’s a plus that the game automatically recognizes when you switch from controller to keyboard and which controller you’re using. But, don’t take Calico’s recommendation to play with a controller too lightly as it will allow for your best gameplay experience. I.E. the god damn camera will be under control.

And now we have arrived at my least favorite part of this article… the bugs and kickstarter concerns. The devs of Calico was nice enough to provide Unboxed with a steam key for the beta. Obviously, the beta will have bugs. And there are plenty of them. While I can be somewhat forgiving to my character meshing into blocky 3D objects, I have to point out how annoying it was to complete quests from certain characters. After reuniting the Owl Club and clearing the path to reach the city, my fellow members remained rooted to one place and refused to move. When interacting with the characters again for quests, it was difficult for me to speak to the member I needed as the location of the menus we’re the same and I didn’t know who I was going to speak to.

Also, is the start screen supposed to be full of flying Calicos’? Because I’m pretty sure it isn’t…

After reviewing the change logs, the devs are working on bug fixes. Great! I’m personally of the ‘better late than never’ mindset and understanding of the many challenges indie devs go through. While I do prefer a game be completed upon release, not everyone can be Shovel Knight or the RE2:Remake. Remember kids, The Witch 3 was a buggy mess when it first dropped as well. I am willing to allow devs all the time they need to fix their game and will write an updated article like my upcoming Best Friend Forever update.

HOWEVER! And that’s a big ‘however’. We must examine that this game was crowd funded. And the backers of Calico’s development may not be so forgiving. If massive (and in my opinion, unnessercery) uproar can last for months after the release of Cyberpunk, it can also happen for a smaller title like this one. I wouldn’t be surprised if fans were disappointed upon the game’s release and expected more. I’ve already come across headlines that have expressed disappointment while researching Calico.

While I have not paid for the game myself (yet), I still cannot ignore how the game’s bugs, graphics, gameplay, ect, may have disappointed backers. While I may be fine with waiting, others may not be. While I don’t mind the janking 3D graphics, lack of animations, and how untimely the weird running animation kicks in when I’m just taking a casual stroll, others will. While I don’t mind how stupid easy this game is and I’m here for a chill stupid easy good time, others probably expected more.

I’m not here to call out any kind of ‘entitlement’ or whatever the fuck people may call it. I’m here to say Calico is a stupid easy game that I’m having a good time with and look forward to playing more of. And yes, I may just buy the switch version because fuck it, all I have is the beta. But, Calico may not be what you want, nor the game backers wanted. And so, it is important to wait!

If you want to play a stupid easy, effortless, bright, sugar sweet game where the quest are effortless and everything is harmless, consider Calico. If you mind the many bugs that are currently being fixed, then get it now. If you mind the price, wait for a sale. If you want to wait, then wait. And if you were a backer who was disappointed by the product, then I’m sorry, but it happens.

Don’t feel like you “wasted your money on a game”. We spend and may waste time and money on lots of things, food, gadgets, people, …..other consoles. Truth is, it happens, and as time goes on, we’ll forget about it.

But please, give devs a chance. Give indie and AAA devs a chance. Devs are the people who make the games we love. And those games both can and cannot be brought to life without support. Which is why I do what I do. I want to try and give the little guys, like we here at Unboxed, a chance. And this article as a whole is basically me giving Calico a couple of months, and a chance.

I’ll continue to hum that wonderful tune that plays at the beginning of a new day when you wake up at Calico. I need it to deal with Karens, and remind me to vent to friends later to make fun of them.